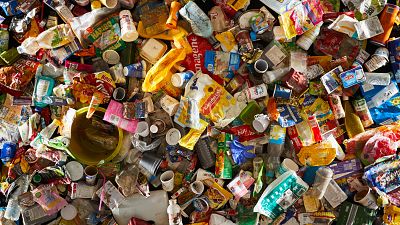 By focusing on a few key products, supermarkets could reduce plastic use by more than a third according to a new report.

Research from Greenpeace says that changing the packaging on just a handful of product types - like fizzy drinks, fruit and vegetables, and household detergents - supermarkets could remove 45 billion pieces of plastic in a year, in the UK alone. This is one of the first studies to zero in on ‘hotspot’ product categories, identifying the biggest culprits of plastic waste in our stores.

“That’s a brilliant target,” says Hugh Fearnley-Whittingstall, celebrity chef, food writer, and presenter of War on Plastic, “and there’s no doubt the supermarkets could hit it if they really wanted to. We need to make them want to – by supporting every plastic reduction initiative and avoiding throwaway plastic where possible."

The team analysed individual plastic components used in packaging, such as lids and films, and then modelled this data alongside weight and sales units to produce the final results. Greenpeace believes that if supermarkets put the findings into practice, plastic packaging could be halved in the next five years.

“Leave over-packaged plastic covered produce on the shelves, buy unpackaged produce whenever you see it, and switch to the shops and supermarkets who are making real changes that help you to shop with less plastic. We need to get the supermarkets competing to reduce plastic – by letting them know our continued custom depends on it.”

Fearnley-Whittingstall believes that supermarkets aren’t moving fast enough when it comes to plastic reduction, with some measures being little more than greenwashing.

“Most of the supermarkets are making plastic reduction pledges of one sort or another. Some of this is encouraging, and some of it is, frankly, tokenistic window-dressing. But none of it is happening fast enough for a problem that’s so urgent for our environment,” he explains.

Plastic reduction is also moving in the right direction when it comes to single-use bags. This month, the British government announced the plastic bag levy would be increased to 10p (€0.11) per bag, with no exclusions for smaller stores as there has previously been.

The British environment secretary George Eustice says the UK is a “world-leader” in green efforts as he unveiled the new policy. Greenpeace has celebrated the move, but is still urging the price to increase to at least 70p (€0.80) or for the bags to be banned entirely.

New York, California, and Hawaii have all already banned single-use plastic bags, so could similar legislation not be far off in Europe?

In an effort to fight plastic bags, a new start-up has been launched in London with backing from the UK government. Bagboard provides eco-friendly paper bags to 2000 retailers across the British capital.

In response to the plastic bag levy doubling, CEO and founder of Bagboard Ashleigh Bishop says, “the continued introduction of plans to help solve the single-use plastic problem is quite simply good news, and at Bagboard we’re all about simple action that leads us towards a better planet.”

Bagboard’s bags also double up as billboards, as brands like Ben & Jerry’s, Sky Ocean Ventures, and Loop have signed up to advertise on the bags. Users are then rewarded through an app for using and reusing the smart bag, with discounts from planet-friendly organisations.

“We reward people with money off sustainable products just for using and reusing a paper smart bag that features planet-friendly brand advertising, and they then use their earned rewards to purchase from brands doing good,” explains Bishop. “It’s a way to take the annual £25bn spent on advertising every year in the UK alone and redirect it to planet positive activity.”