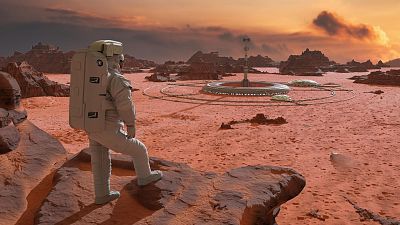 We’ve all heard the joke about NASA and the special space pen. Why did they not just use a pencil like the Russians?

Aside from the premise of this joke being essentially a myth, there is a bigger scientific misunderstanding behind it. The $1 million pens created for NASA could write in just about any situation you can imagine and, in fact, solved the problem of pencils being a potential fire hazard in the sealed environment of a spacecraft. A prescient concern for the organisation after the tragedy of the Apollo 1 test fire.

You’re probably wondering what on Earth space pens have to do with the link between journeying to Mars and protecting the environment - but bear with me. People’s response, one of contempt at this alleged rampant overspending on pens, indicates a lack of knowledge about just how many different things have to be considered to make a mission out of the atmosphere safe and successful.

The International Space Station (ISS) which sits 400km above the Earth’s surface is a completely closed system. Space doesn’t provide for basic human needs like air, water and food for astronauts so limited resources have to be managed in a circular way, making sure that the most value is gleaned from anything taken on board.

We are all astronauts on a little spaceship called Earth.

Things we take for granted, like a pencil, could prove to be a lethal hazard or just might not work in space as they do on Earth. As a result, all items have to be carefully considered before boarding, but with weight so strictly limited, every decision must also take efficiency into account.

When you think about it like this, we are ourselves, essentially, floating through space in a much larger version of the same system. To quote American futurist Richard Buckminster Fuller, “We are all astronauts on a little spaceship called Earth.” We have self-sustaining life support, limited resources and the need to get rid of waste in a way that means it doesn’t pile up in every corner of the planet. We have to find ways to keep ourselves safe, just like astronauts do.

Much like the space pen, tech developed for extraterrestrial activities can be used to solve problems faced by humanity. The added challenge of long-term survival in space is one that has the potential to birth a wealth of helpful solutions with much broader applications than the ability to write whenever and wherever. But how exactly can this technology improve our lives on terrafirma?

Around the world, 72 countries have space agencies and 14 of those have launch capability. Here in Europe, the European Space Agency (ESA) has been trying to work out how to make a spacecraft a self-sustaining environment since the 1980s.

“[Our] goal is to build the ultimate recycling machine,” Rob Suters, co-founder of ESA programme MELiSSA tells Euronews Living. Founded in 1989 MELiSSA is an international effort made up of members from 60 different academic institutes, whose goal is to make long term human space travel, like a round trip to Mars, a real possibility.

The acronym stands for “Micro-Ecological Life Support Alternative” and the group has a multitude of projects that aim to help astronauts regenerate resources. This would prevent them from having to take everything they might need with them from Earth on long missions.

“Strategically it makes more sense to develop a closed life support system as opposed to building bigger rockets and just bringing everything and deplete what’s in stock,” says Suters. As missions become longer, there could come a time when the rockets required to launch the supplies needed would have to be unreasonably large.

“A space mission to Mars takes roughly three years to complete. With a crew of six astronauts, approximately 30 tons of supplies are required to provide for both the outward and return journey,” he reveals. “This includes minimal amounts of water, nutrients and oxygen.”

“To actually enable a space trip to Mars, or beyond, continuous recycling of resources, [...], in order to produce food, water and oxygen on site is a necessity.”

Why a spacecraft is not so different from planet Earth

Suters here interjects that he hopes the parallels between spacecraft and planet Earth are becoming more clear. What he means is that being able to recreate a sealed ecosystem in which humans can survive benefits space travel, sure. But the technology that results from it could also benefit those who live in parts of the world where water or even clean air are not easy to find.

“The knowhow and findings are of direct relevance to Earth because essentially the challenges that we have in space are identical to the ones we have on Earth,” he says. “Consequently so are the solutions that are designed for space, very often with modifications including upscaling of course.”

One example of this can be found at the University of Kenitra in Morocco. Systems which recycle wastewater originally developed for astronauts on the ISS are now being used to create drinking water for a school. The principles behind the organic membranes, which use bacteria, algae and other filters to remove nitrates from groundwater in the area, were created by MELiSSA. With holes 700 times finer than a single strand of human hair, they can easily filter out unwanted compounds with very little ongoing maintenance required.

If this works well for the school, the ESA says that the technology could be scaled up to provide clean drinking water for the entire surrounding village of Sidi Taïbi. This could also bring Morocco closer to meeting UN Sustainable Development Goal 6: Clean water and sanitation.

A post shared by MELiSSA Space Research Program (@melissaspaceresearchprogram) on Jul 1, 2020 at 8:52am PDT

Perhaps a slightly less expected application for the work MELiSSA does can be found at La Trappe Brewery in the Netherlands. It is one of Suters’ favourite projects and is a test facility for circular water recovery essential to the self-sustaining life support systems.

Using a bioreactor filled with over 2,000 different species of microorganisms, wastewater from the brewery can be recovered to irrigate crops or added to the beer-making process itself. Carbon, nitrogen and phosphorus can also be recovered and turned into plant fertiliser or even human food. It may not be providing clean water to highly polluted villages but it all helps to lessen the impact of the brewery on the surrounding area - making its operation more sustainable and circular.

It’s not difficult to see, then, how these problems of spending years in space and the technology developed to solve them can have substantial environmental benefits. As Suters concludes, “We are all space travellers as the planet moves across the universe and our planet is our spacecraft, except that obviously we didn’t build it, but still have to look after it.

“We need to start treating our planet in the same way an astronaut would treat his or her precious space habitat.”