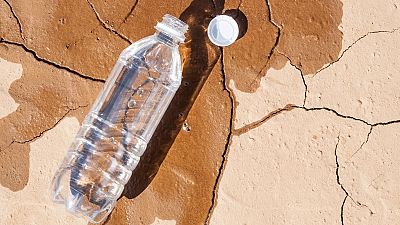 The city of Chelm in Poland has announced plans to sell its surplus tap water.   -   Copyright  Getty via Canva
By Juliette Bretan  •  Updated: 25/07/2020

Poland is drying out.

This spring, the country faced one of its worst droughts in a century – a climate emergency which follows a succession of equally dry periods over the last few years. Temperatures have reached record highs; Polish rivers have reached record lows. And experts have been left worrying about the future.

“We have a problem in understanding what climate change is, what a water shortage or a water management problem is,” says Professor Bogdan Chojnicki, from the Department of Ecology and Environmental Protection at the Poznań University of Life Sciences.

“We are really trying to convince people to think about the long-term.”

Last month, the picturesque city of Chełm, in the east of the country, announced plans which it says could help address the problem.

Chełm is famous for producing chalk with water extracted during the mining process used to supply local houses. At the moment, this process creates more water than residents need. It is estimated that around three million cubic metres have been wasted in recent years. Now, authorities say they want to put this resource to use by bottling the surplus and selling it.

“The municipal authorities in Chełm are implementing the idea of production of the spring water with the aim of taking the advantage of the excess of it that is extracted,” the city explained in a statement. “Putting the water into bottles and selling it as local spring water is an effective way of dealing with this.”

The project certainly appears to be a positive step: Chełm officials say the water contains a similar amount of minerals to water already available on the market, and sales could start in just two years. They are calling it their own response to climate change.

Experts see a more complex picture of water usage in Poland. The recent severe droughts – last year was the country’s hottest since records began – have exposed the extent of the problem.

“We had a very dry winter and warm winter – we didn’t have snow,” explains Professor Paweł Rowiński, hydrologist and Vice President of the Polish Academy of Sciences.

“We had a big deficit of water from the very beginning.”

The increasing threat from climate change has also been exacerbated by water mismanagement. Over the decades, Polish rivers have been regulated and areas sealed off, with places for water storage removed and concreted over.

And, though the drought conditions might have improved since spring, this has combined with intense rainfall in the last few weeks to create a whole different set of challenges.

“Lots of this rainwater – it pours down and then water flushes away to rivers – it’s a retention issue,” explains climate journalist Wojciech Kość.

This means that the threat of drought is also sticking around: the water is simply not penetrating deep into the ground.

“We have an acceptable amount of water in the upper layer of soil,” notes Chojnicki. “Deeper than 30cm, it is still very dry.”

“But for a regular person in Poland, the drought is invisible.”

For Chojnicki, Poles are simply misunderstanding the extent of the danger. Though he says there has been more awareness of climate issues in recent years, particularly since the droughts have become widespread, this has only focused on short-term solutions.

“And five years of drought has resulted in the feeling that only a lack of water is a problem,” he adds.

A problem with bottled water

The complicated situation around water usage has prompted criticism of the project in Chełm. City authorities say that alongside tackling water waste, the sale of their tap water could also address flooding risks, by replacing the current policy of draining off unsold water into local rivers. With the widespread water issues, there is scepticism that the idea may not go far enough – and could even reinforce age-old attitudes.

“The [Chełm] action manifests some Polish peculiarities,” notes Piotr Panek, from the General Inspectorate of Environment Protection. “First, it perfectly fits the Polish phobia of tap water. This attitude was fully justified in 1980, when drinking tap water was a real health hazard. Nowadays water quality in natural water bodies is generally better.”

Awareness, however, has not kept up with the times, he says, and Poles continue to buy bottled water.

“Lots of people think bottled water is the way to go,” he explains.

And with its popularity, says Panek, the water itself has generally low level of minerals. “That’s why a tap water supplier can advertise its water as virtually the same as the most popular brands of ‘mineral water’”.

“If a tap water supplier looks for better selling outcomes, it is logical to sell bottled water.”

In their statement, Chełm says the project is not commercial, and will instead only serve to create new jobs and address climate challenges. With production only running until chalk extraction ends, experts have questioned whether it will be a sustainable solution. Even aside from issues around water itself, the thousands of bottles produced by the project would also contribute to plastic pollution.

Professor Zbigniew Karaczun from the Department of Environmental Protection at the Warsaw University of Life Sciences takes a more optimistic view, saying the project could work as “an educational activity.”

“Such action does not save water – but it can teach people that it is worth it to save water and use it effectively,” he adds.

If the project does live up to its aims in teaching people that water is valuable, then this will certainly be a step forward for Poland. More practical, long-term change - the type which could really improve Polish water issues - might be harder to achieve.