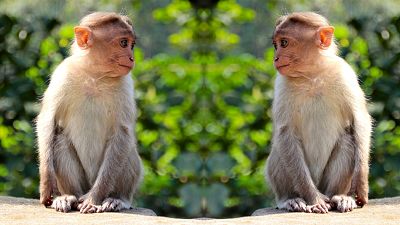 Animals benefit from social distancing as well as humans, researchers have discovered. A team at the University of Texas at San Antonio (UTSA) has been observing monkeys in the wild to learn how diseases can spread between them.

Scientists examined how distance within social groupings affected the spread of microbes between a sample of 45 colobus monkeys in Ghana. The animals predominantly stayed in eight distinct social groups. Through analysis of fecal matter, the researchers found that there were major differences in the types of microbes living in the guts of each group.

“Social microbial transmission among monkeys can help inform us about how diseases spread,” explains Eva Wikberg, an assistant anthropology professor at UTSA. “This has parallels to our current situation in which we are trying to understand how social distancing [...] may influence disease transmission.”

Wikberg and her team found that groups which came into closer contact with one another, even only occasionally, had more similar gut microbes than those who never came into contact. If this is then applied to our current context amid the COVID-19 pandemic, it shows that even a fleeting interaction can be enough to transmit the disease.

"Studies of wild animals can teach us a lot about the importance of using interventions such as social distancing to ensure a safer community during this pandemic," says Wikberg.

The World Wildlife Fund (WWF) recently compiled a list of species from around the world whose behaviours make them self-isolation pros.

The list includes major carnivores like polar bears, who apparently spend most of their lives alone. “Apart from actively seeking mating partners in the later spring and early summer and raising their cubs, adult polar bears tend to be on the anti-social side,” says the charity.

Polar bears are good at self-isolating as they tend to be on the anti-social side.

Perhaps unsurprisingly, blue whales, snow leopards, and jaguars are also among the WWF’s selection of top self-isolators. But more surprisingly the native Australian platypus is ranked highly too, with the apparently “shy” species being “perfectly happy leading a solo life.”

When it comes to avoiding illness, even the more social species seem to opt for distance to stay healthy. Ants are known to self-isolate when they are sick by reducing contact with healthy members of their colony, significantly changing their behaviour to prevent the spread of disease.

Honeybee colonies can be devastated by bacterial diseases, with some microbes even causing the larvae to liquify from the inside. According to research by entomologist Alison McAfee from North Carolina State University, when larvae are infected they emit chemicals which other bees can detect.

If the larvae are found to be emitting the signifying smell, the bees in the colony will eject the diseased bunch from the hive. While this isn’t a method we’d advocate for humans, it’s noteworthy that social distancing seems to play its part in much of the animal kingdom too.