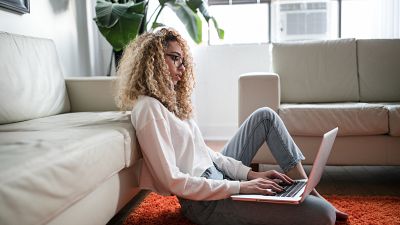 On day one working from home, I took myself on a motivational trip to IKEA. That was before the home furniture giant took the monumental decision to close its stores across Austria, Belgium, Canada, Czech Republic, Denmark, Germany, Italy, Ireland, France, the Netherlands, Poland, Slovakia, Spain, Switzerland, the UK, and the US.

On day two, I cooked a veritable banquet for lunch because hey, I was already at the kitchen table. On day three, I wanted to cook another banquet but couldn’t get any of the basics after panic buying left supermarket shelves bare. Instead, I worked out how to hook a gin glass in my underwire so I wouldn’t have to reach as far as the coffee table. Then I took a siesta.

By day four of social distancing, I had had enough. It seems that because I wasn’t around people, and not in an environment I usually associate with working, I was falling below my usual standards and forgetting that I had a job to do.

Why working from home can be challenging

Studies are divided on whether working from home boosts or slashes productivity, suggesting that your ability to work effectively from home depends on your personality.

Working at home often means your emails will be far more active than usual in addition to instant messaging services like Slack. Couple that with a desire to prove you are present and working could lead to responding to messages more quickly, taking away from your ability to focus on key tasks. If there’s a possibility of switching those notifications to silent, and if you’re lucky enough to have a relatively quiet place to work, it’s more than possible to get on efficiently with work.

Others fare differently. The scene pictured by many worried bosses is employees spending the day in their pyjamas, with the television on and a packet of crisps at their side, intermittently checking emails, but undeniably less productive than they would be in the office.

If you fall into that second group, chances are you need structure and social accountability to work effectively. Working in a there otherwise happy place will not come easily to these types of people, who find themselves putting tasks off and getting distracted by other activities in the home.

Boosting your productivity through social accountability

I recently discovered Focusmate, an app dedicated to giving your home just enough of an office vibe to get you working again. The simple concept allows you to book out blocks of your day, during which time it will match you with another homeworker. For each session, it will use your webcam and audio to broadcast a small picture of you to them and them to you to. It almost gives you a deskmate, and at the very least should make you think twice about whether now is the time to pop that load of washing in the dryer with a pair of eyes on you all the time.

“Working from home presents major challenges for getting things done. We're isolated, we lack the structure of a workplace to help trigger us into action, and toughest of all we lack social accountability,” says Taylor Jacobsen, founder and CEO of Focusmate. “As tribal animals, we need the presence of the group to activate peak performance. When we work alone, we become comparatively apathetic and anaemic.”

That’s certainly the case for the millions of office workers who are now being asked to stay at home for the first time in their careers. This comes as a result of offices across the world shutting down over fears about the spread of the new coronavirus.

The sudden uptake in home working led to a record numbers logging on and signing up for Focusmate last week, with the New York City based business seeing a 530% increase in usage from all around the world. As much of the US and UK enter lockdown this week, the business is braced for even more soaring demand in the coming days.

Does it actually work?

According to users, yes. Much like an office environment, you give yourself a designated start and finish time. Sessions in smaller groups allow you to take the short tea and chat breaks you would naturally take in a working day at the office.

“Focusmate is designed to create the optimal combination of camaraderie, structure, and accountability,” adds Jacobsen. “It's sort of like a study buddy for remote workers. Over 95% of our users say Focusmate improves their productivity by at least half.”

As people face the possibility of going without trips to the coffee machine with their colleagues, for likely months, seeing a face in the corner of their screen with the ability to smile across the room might provide some semblance of normality. And just maybe it could stave off the reality for many, that the next phase we face could be a lonely and trying time.

MEPs push for workers to have the right to digitally disconnect