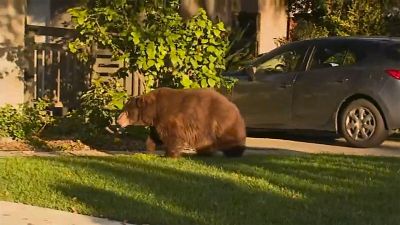 The coronavirus pandemic has been good news for much of the world's wildlife. With people staying at home and travelling less, animals have been spotted in unusual places and air pollution has dropped in some areas.

In the Welsh town of Llandudno, goats were out and about as lockdown measures put in place by the authorities largely cleared the streets of humans and traffic. A wild puma was seen prowling through Santiago in Chile and a coyote stalked the viewing area of San Fransisco's Golden Gate Bridge, a place that is normally packed with tourists.

With less human interference and light pollution, sea turtles across the world are daring to lay their eggs on beaches they once avoided. For the first time in around a decade, Olive Ridley turtles can nest off the coast of the Bay of Bengal in India. It's making scientists hopeful that their breeding season will be a success for the next generation of endangered creatures.

"It is giving a unique insight into the impacts that we humans have upon the environment in many ways. We are beginning to see wildlife that we are not expecting to be there," says Stuart Pimm, a noted conservation scientist from Duke University in the U.S. "We are seeing clear skies. We're seeing views of mountains that only our grandparents told us about. We are seeing a reduction of pollution. It is giving us this quite extraordinary insight into just how much of a mess we humans are making of our beautiful planet," he adds.

Researchers say they're eager to explore changes in weeds, insects, rain patterns, noise and light pollution, clouds and even the daily hot and cold temperature spikes.

The most obvious change is in the cleaner air

Smog has lifted in New Delhi, one of the most polluted cities on Earth, meaning Indians are getting to see clearly for the first time in decades. Nitrogen dioxide pollution in the north-east America is down 30 per cent and Rome's air pollution levels are down more than half compared to a year ago.

NASA and others are noticing dramatic drops in the more traditional air pollutants, such as nitrogen dioxide, smog and tiny particles. The air along the U.S. Interstate 95 corridor from Boston to Washington is the cleanest it's been since 2005, after a severe decline in vehicle traffic. Air pollution over China too has shown improvement since December.

Click on the video above to see wild animals in places you wouldn't have guessed.

A mink may have transmitted COVID-19 to a human, says Dutch government