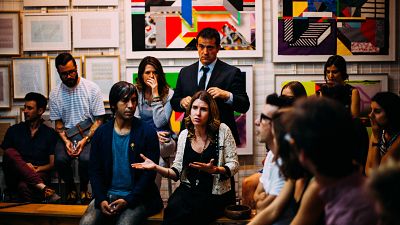 Differing views on who is responsible for climate change action can make legislation difficult.   -   Copyright  Unsplash
By Rosie Frost  •  Updated: 12/03/2020

Despite increasing levels of awareness about the impact of climate change, some people are still hesitant to make big lifestyle changes that could help reach targets set by The Paris Agreement. How they view the world might offer an explanation for this apprehension, according to a study published in the journal Energy & Environment.

Researchers asked people from different regions of Austria to find out how much they knew about climate change and what they believed were the most effective methods of making a difference. They found incredibly high, almost unanimous, awareness about the need to reduce our impact on the planet but there was a lot of variation in the way that the people who responded thought this should be done. That means that although they might agree that combating climate change was important, their ideal solutions could be very different.

Worldview, it turns out, has a big impact on who you think is responsible for making these changes. The study found that several distinct ways of looking at the world influenced whether the people they asked were willing to make changes to their own behaviour and the kind of policies they thought would be effective.

Where some saw climate change as a problem for governments to solve, others believed individual lifestyle swaps like travelling less, adopting a plant-based diet or switching to a green energy company were key. Those in the middle ground who held a more egalitarian view believed that everybody had an equal responsibility to make changes to slow the effects of global warming.

“People might be reluctant to change their behaviour because they perceive some kind of lack of fairness that they are changing and that community nearby is not doing anything,” Komendantova explains. She says that knowing why people are hesitant to change their ways can help address their climate concerns and could make future campaigns more successful. “For instance, if people are reluctant to change their behaviour because they feel that they don't own energy transition, those decisions are taken somewhere else and they are excluded, providing them with options for engagement and participation might change this attitude.”