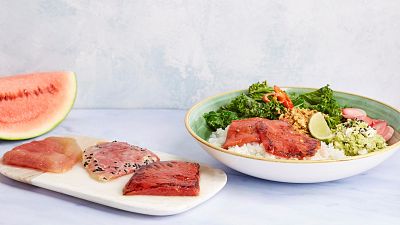 Restaurants have gone wild for Veganuary – a post-Christmas purge month for ditching all animal products from your diet.

A few years ago, when the Veganuary charity first launched in 2014, that meant pretty drastic changes to the diets of many omnivores who were forced to seek out plant-based alternatives in a scant marketplace. For many, it meant a diet of more fruit and veg.

But as Veganuary predicts its biggest ever year, with hundreds of thousands of people around the world taking the pledge to go animal-free for 31 days and even more taking part unofficially, restaurants are wising up to this new niche in consumer demand.

The trademark Meatball Marinara Sub has been given a vegan makeover. It’s now got meat-free balls and a plant-based cheese alternative to satisfy cravings.

The Vegan Original Recipe burger was previously known as The Imposter when it made a brief appearance in limited stores last summer. Now, it's back and available throughout the UK at most KFC stores.

Made with a Quorn fillet and baked rather than fried, it offers a healthier alternative to the Kentucky Fried Chicken the brand is known for.

This steak is made from watermelon. The “steak” is made by chargrilling watermelon slices before marinating them in savory spices and seasoning them with sriracha. It's served with an avocado sauce and Fridays Legendary glaze alongside veggie sides.

Greggs' sales have soared since the launch of its vegan sausage roll last January. It's attempting to repeat its winning veganising formula with the stalwart Steak Bake, which is now available in a meat-free variety made in collaboration with Quorn.

Pizza Hut has capitalised on the success of last year's Veganuary special jackfruit pizza by reintroducing it as a pizza roll. Taking its place on the main stage is a Pepperphoni pizza - a pea-based imitation of pepperoni slices with vegan cheese.

In addition to a new host of plant-based drinks and snacks, Costa has launched a new toastie made with vegan Quorn ham and a dairy-free cheese alternative.

Within hours of its launch, this burger caused controversy. Though plant-based, it's cooked on the same grill as its meaty counterparts putting die hard vegans off.

This one is only available for January, unless its popularity warrants a permanent place on the menu.

Now, we’re just waiting for Pret, which is planning to launch a vegan croissant filled with berry compote tomorrow.

The best and worst vegan options on fast food menus

Why hidden ingredients mean your wine might not be vegan