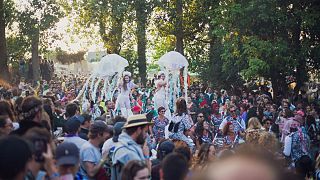 Setting sail from the south coast of England on 11th July, we watched the coast fade into the distance as we made our way to the coastal town of Dieppe in Normandy, in pursuit of France’s most up and coming multi-genre music festival, Pete the Monkey. Arriving at 3pm in Saint-Aubin-sur-Mer, we soon received our backstage passes, before lounging in the sunshine sipping organic tea while taking in the beauty of the farm. Before we knew it, the confetti was flying, the bass came through the speakers and the three day party had started.

Over the course of the weekend, Pete the Monkey took us on a liberating journey into an eclectic mix of music that was simply unforgettable. From electro pop to dance music, hip-hop and rap to jazz and funk, the feeling on site was electric. It was a quirky scene, picture this: bunting strewn across the festival like interconnecting telephone wires, scattered hay bales, Tipis galore and people in banana costumes strolling around as normal. Just when we thought we had seen it all, a 9-piece walking brass band would stroll past us, performing a genius rendition of Daft Punk - in matching Hawaiian shirts no less. But of course, there was more to discover at Pete the Monkey than just the music; the whole experience brought out our creative side, let our imagination run wild and, crucially, taught us exactly how to party - with minimal environmental impact.

Behind the ethereal aesthetic of floating books, vibrant flags, cotton wool clouds hanging from the trees, drapes of fairy lights and artisan food trucks, Pete the Monkey went the extra mile to ensure that sustainability was at the core of the festival’s ethos. What's more, profits from the festival are invested into the largest monkey reserve in Bolivia, Jacj Cuisi. Hence the name, ‘Pete the Monkey.’ So, it literally exists to help animals at risk of deforestation and trafficking - a super commendable cause!

From bamboo toothbrushes at the camping site, to pre-arranged bike rides to and from the festival and water refill points instead of plastic bottles – we saw it all firsthand when we were given exclusive access to this exquisitely unique musical festival.

What's on at the festival

The music is always the focal point of any festival, and Pete the Monkey did not disappoint. On the bill this year we saw Oscar Jerome, Feng Suave, Folamour, Kokoko, Otzeki and Papooz, amongst our favourites, all of whom gave animating performances we won't forget. In fact, we left feeling inspired to listen to them all upon our return to England and delve deeper into their musical repertoire. To our surprise, one of the festival’s biggest sound systems at the Pikip stage was completely solar powered - and it's safe to say the DJ sets sounded even better when we knew that the sun had been integral to amplifying the sound! Woozily dancing into the early hours at the silent discos, in front of the Camion Bazar DJs and at the secret cabaret stage (we’ll leave you to find that one), we felt completely at home at Pete the Monkey.

But this eco-friendly, totally original festival did not stop there. We went along to the stage where environmental experts were giving insightful talks throughout the weekend, to learn about permaculture, urban horticulture and marine ecosystems. Speakers were fascinating and the talks were the cherry on top of the whole festival experience. Everyone present was captivated by the inspirational messages being delivered.

We even branched out to the arts and crafts area and bonded with fellow fun-seekers as we were given a completely biodegradable glitter makeover. Our creative juices really began to flow when we painted our own piece of art, based on a word we had chosen in a lucky dip. Our word was ‘jungle’, so we embodied the nature theme and mixed acrylics and watercolours to paint a 'jungle world' on the wall.

Temperatures slightly dropped at night so we had a nightly ritual of warming up in the sauna in the wellness tent, and then relaxing to the sound of live music next to the open fire. As you may have guessed, this was all the more enjoyable as the area was run using sustainably sourced wood fuel and solar power. We expected nothing less!

When it came to the food, every meal can be summarised in one word: délicieux. We had the 'tough' job of sampling a range of food trucks throughout the weekend, trying each of their international delicacies which included burritos, fancy cheese toasties, Vietnamese banh mis, pizza and French galettes. We spotted (and followed determinedly) a London based cheese toastie truck as we disembarked the ferry in Dieppe and were pleased to hear that the brie we had devoured was of course locally sourced. We spoke with the founders, Rob and Louis Dumas, and co-directors Pauline Couten and Victor Hall, who told us that the festival only works with “organic, fairtrade and reasonably sourced products” and added, “we use local ingredients as much as we can and we let the food trucks know where they can get their ingredients from.” You won’t find beef on site but we would highly recommend the duck confit or the veggie burritos.

Our time at Pete the Monkey

When the time came to say goodbye to this magical place, we packed up the tent, filled with the leftovers of our biodegradable glitter, and made our way to the ferry. It was extraordinary that an event on such a scale could make people consider their own impact on the environment, whilst having fun at the same time - we couldn't wait to get home and tell our friends. Next year, we will be sure to return to this liberating and musically diverse festival and we're excited to see how they can top all the environmental work they're already doing, in a year's time! And without a doubt, we'll be on the hunt for that quirky little cheese toastie truck once again.