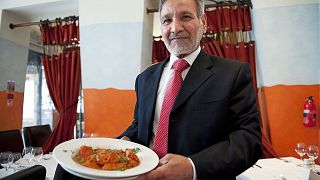 Aslam was born in Pakistan before moving to Glasgow as a child. He set up his restaurant, the Shish Mahal in the city’s West End in 1964.

The origin myth of the Chicken Tikka Masala is that a customer once complained about a chicken dish being too dry in the 70s. In response, Aslam was inspired by the food he’d been recently eating to soothe a stomach ulcer: Campbell’s condensed tomato soup.

Combining the tinned tomato soup with spices and chicken, the Chicken Tikka Masala was born.

"So since then we've been cooking it with a sauce made of yoghurt, cream and spices,” Aslam told AFP in 2009.

Whether Aslam and the Shish Mahal are the true originators of the dish is somewhat indefinite. There is the suggestion that it was first created in Balbir Singh’s Shahi Chicken Masala recipe in her 1961 cookbook.

But the general story goes that it was invented to cater to British palates.

Chaudhry Mohammad Sarwar, a Glasgow MP from 1997 to 2010 and the twice serving Governor of Punjab has supported the Chicken Tikka Masala as a uniquely Glaswegian dish.

Sarwar tabled a motion in the UK’s parliament to provide the dish with the legal protections of other regional dishes like Melton Mowbray pork pies.

While the bid for EU Protected Designation of Origin status was unsuccessful, the myth lives on that Aslam was the inventor of the revered dish.

A survey in 2011 put Chicken Tikka Masala as Britain’s most popular dish. Other popular dishes mentioned in the survey included stir-fries and fish and chips. At the time, the result was heralded as an example of Britain’s multiculturalism.

And that dish all came from the mind of Aslam, whose restaurant, the Shish Mahal has closed for 48 hours in honour of his passing.

“The restaurant was his life,” said his nephew Andleeb Ahmed. "He ate lunch there every day at noon."

“The chefs would make him a curry,” he said, recalling that last year at Christmas he visited his perfectionist uncle in the hospital, who tossed him a line at the end that he “should be at work.”

What should you ask a baker before buying a baguette in France?