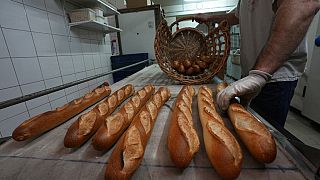 As 2022 draws to an end and some of us look back on what was or might have been, Euronews Culture has been breaking bread with many of our French bakers over the UN's historic decision to heap its highest praise on arguably France's most humble item - the baguette.

In case you missed it, the United Nations' cultural agency, UNESCO, rewarded French artisanal savoir-faire by listing the baguette an "intangible cultural heritage of humanity".

Now don't get me wrong, as a Frenchwoman, it's great to see an everyday product celebrated, but the baguette is perhaps the worst item in a French shopping basket to pick as the flag bearer for our culinary knowledge.

Indeed, in France, behind the word "baguette", you will find a wide range of different quality products; from very tasty homemade baguettes to very insipid generic ones.

That's no surprise in itself, but you may not know that a growing number of French people are turning their noses up and away from the baguette. The average household ate about three baguettes a day at the start of the 20th century, compared to barely half of one today.

Back to bread basics

But how did France, the world's gastronomic capital, get here?

To better understand, let’s go back a little in time and follow the thread of the baguette's history… Invented in the 19th century, the apparition of baguette greatly reduced the arduous work of bakers, its long shape reducing in particular the cooking time.

During the 20th century, kneading was gradually made easier by the arrival of machines, white flours prevail over whole grains, and yeast - which makes the dough grow faster - gradually replaced sourdough.

The baguette, first reserved for city dwellers, became popular after the Second World War, in the 1960s and 70s, at the time of the boom of intensive agriculture and food production industrialization.

But fear not. There's a new generation of bakeries, run by artisans, for whom the baguette is a sad symbol of the standardization of food. And they want to reinvent our daily bread.

Mayé is one of them. In her Lyon bakery, she doesn't sell baguettes or croissants but sliced ​​breads that change shape every day, all 100% made from natural sourdough.

Mayé is Mexican and has been living in France for 11 years.

"Bread, here in France, is sacred, I still remember the first time I entered a bakery, it was magical."

Before opening her own business, she first worked for six years as a pastry chef in various bakeries.

"When I started working, I quickly realized how badly the bread was treated here, especially the baguette. In many bakeries, additives and gluten can be added to the flour to speed up the production; and ready-to-use “mixes” are a common practice. It's like when you buy a pancake mix at the supermarket, you just have to add water and that's it."

Since the 1970s, supermarkets, bakery chains and franchises have multiplied, threatening the artisanal techniques. 400 artisanal bakeries on average have been disappearing every year for the past fifty years, mostly in rural areas.

"Today, sourdough, once an essential ingredient in bread making, is no longer even taught in most of the bakery courses” explains Mayé.

In order to revalorize the work of artisans, since 1993, the traditional techniques of making bread and in particular the famous “baguette tradition” – which represents now half of the baguettes sold in France - have been protected under a law. The only authorized ingredients are flour, salt, water, sourdough or yeast.

In many bakeries, additives and gluten can be added to the flour to speed up the production; and ready-to-use “mixes” are a common practice.

For Mayé, as for these neo-bakers, inspired by ancestral methods, the baguette is already old fashioned, and it’s time to restore bread to its former glory. Her recipe? Organic flours made from various cereals (wheat, einkorn, rye…) of old varieties and above all, homemade sourdough.

“Homemade sourdough is water, flour and patience. The mixture through fermentation creates bacteria and yeasts that we add to the dough. It takes time but that's what will give all the aromas to the bread, improve its conservation, and make it very digestible".

Baguette or not, "whatever kind of bread you buy, don't hesitate to ask your baker questions, ask about the type of flour, if there is sourdough, how the bread was made. A baker who works with raw ingredients must know how to respond”.

Let’s hope UNESCO's recognition will help to tackle the appetite for industrial baguettes, by highlighting the specific traditional knowledge of French bakers but I fear that this award will put more emphasis on the baguette compared with artisanal know-how.