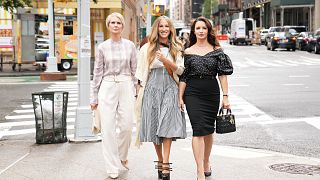 Day 11 of our Cultural Advent Calendar, in which we’re counting down our highlights of 2022 day-by-day all the way to Christmas and beyond. Our top TV and streaming picks continue with 'And Just Like That...', the revival and sequel of the HBO television series 'Sex and the City'.

There’s a certain generation of people for whom ‘Sex and the City’ was so formative that rewatching the show is like a journey deep into your own psyche. I’m talking about myself, obviously.

When the sequel ‘And Just Like That...’ was announced, I was equal parts apprehensive and excited.

After nearly two decades of admiration for the cult show, what felt like hundreds of Buzzfeed articles dissecting all its problematic elements (too white, biphobia, the gender politics of it all etc), not to mention an extremely public feud between the show’s lead actors, I couldn’t help but wonder… Would it be any good?

The result is a mixed bag (or rather a mixed Fendi purse) which saw some heartwarming moments and genuinely likeable new characters mixed in with an awkwardly handled progressive agenda.

Sarah Jessica Parker returns as the eternally neurotic Carrie Bradshaw, this time around grieving for husband Mr Big who is killed off in episode one - conveniently for the producers given that actor Chris Noth was accused of sexual assault shortly after the episode aired. She’s joined by Cynthia Nixon as lawyer and newly-minted Karen, Miranda, who gets the lion’s share of serious storylines, both coming out as queer and battling an alcohol addiction. Meanwhile, Kristin Davis returns as Park Avenue princess and eternal Polly-Anna Charlotte whose uptown perfect world is rocked when her child comes out as nonbinary.

An excellent addition to the cast proved to be Seema Patel as the straight-talking, no-f**ks-given real estate agent Sarita Choudhury. A less beloved character (and one who was perhaps emblematic of the issues with the show) was found in Che Diaz, portrayed by actor Sara Ramirez.

Ramirez’s performance as the standup comedian, Carrie’s podcast boss, and Miranda’s love interest proved to be admirable but the source material was sadly lacking. Diaz’s constant delineations of her own sexuality and gender identity, along with awkward professions about her life experience could have been valuable had they not had all the subtlety of a Manolo Blahnik stiletto being rammed into a beach ball. The scripting of the character epitomised the problem of the show’s attempts at consciousness raising which - again while admirable - sat awkwardly with the tone of a TV series beloved for its irreverent sense of humour.

Here we come to the crux of the issue: there simply aren't a lot of laughs to be had in ‘And Just Like That’.

After the series came out, I felt the siren call of a ‘Sex and the City’ rewatch beckoning me as the autumn months drew in. Watching with a glass of sauvignon blanc it dawned on me that there was one key ingredient ‘And Just Like That...’ was missing - Kim Cattrall.

Cattrall’s famous feud with Parker and estrangement from exec producer Michael Patrick King meant she wasn’t even asked to star in the show’s sequel. The character of Samantha supposedly leaves New York after a fight with Carrie and only appears via text message and, on one occasion, a note with a bunch of funeral flowers; impressively one of the most tear jerking moments of the whole affair.

Cattrall’s comedic timing is unparalleled as Samantha in the original series and rewatching it after 'AJLT' really highlights how she brought the show together. I have no doubt that she would have livened up the tonal shift from unthinking 90s consumerism to the politically correct iteration of the 2020s with a few perfectly delivered one-liners.

While Patel offered some replacement for this and Mario Cantone delivered in his rare appearances as Anthony, Samantha is much missed as the arguable heart of the original show. Let’s hope Cattrall and Parker can put their differences aside for a reunion next season. But let’s face it - it’s more likely that a post-MeToo Noth would be recast as an undead Mr Big.