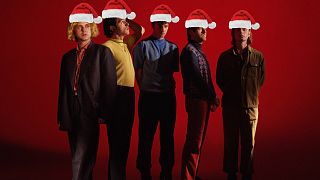 It's the third day of our Cultural Advent Calendar, in which we count down our highlights of 2022 day-by-day all the way to Christmas and beyond. The first seven days are our musical favourites of the year. We've had Beyoncé and Black Thought & Danger Mouse - today: Fontaines D.C.

Few bands get to chart a path to success like Fontaines D.C.

The Dublin-based group first came together after the bandmates met at music college. Before they released any music, the group put together two poetry collections.

By 2017 they were steadily releasing exciting punky singles that were grabbing attention on an increasingly international level. Their first album 'Dogrel' came out in 2019 to almost universal acclaim. Many heralded it as part of the return of punk.

Claims that Fontaines D.C. are bringing back punk aren’t completely unfounded. Alongside British band IDLES, the two have become a festival mainstay, attracting broad crowds to their frenetic sets, a far cry from the mellow indie and pop dominating other stages.

Fontaines D.C. followed up 'Dogrel' with 'A Hero’s Death' in 2020. Unlike IDLES who, to a certain extent, have stayed true to their singular identity of the loud shouty men with politically astute observations, Fontaines D.C.'s sophomore effort showed a band maturing.

That maturity was recognised with a 2021 Grammy nomination for Best Rock Album, and the sizes of the shows the Irish quintet kept on growing.

This year, the band returned with their third offering, 'Skinty Fia'. Once again, they’ve grown in stature.

This was always a band formed around a deep consideration of lyrics. 'Skinty Fia' brings some of their most complex topics to the fore, while also deepening a sound that has evolved from scrappy post-punk stylings to the anthemic.

Their sound might look like it could fill stadiums better, but it’s not through any crass act of boldness. Instead, it’s through creating haunting reverb-drenched guitar lines like the lead of ‘Roman Holiday’, a deliciously yearning lick that with a somnambulant echo.

'Skinty Fia''s greatest qualities are how the emotional depth of the soundscapes pair so well with the resonant themes of Grian Chatten’s vocals. Chatten reflects on his emotional failures in songs like 'Jackie Down the Line' and 'Nabokov'.

But it’s with his musings on Ireland that the album comes most alive.

'I Love You' is the standout track on a standout album.

It fills its verses with an almost twee groan of pining from Chatten.

But soon the love letter turns into a lament before fully transforming into a spat invective of a chorus.

Chatten pulls no punches as he damns seemingly every aspect of an Ireland that he sees being torn apart by a complacent and malignant elderly class.

“And they say they love the land, but they don't feel it go to waste / Hold a mirror to the youth and they will only see their face,” he spits in a monotonous dirge that eschews any conventional chorus tonality.

It’s a raw punch to the face that’s followed by the grim “Makes flowers read like broadsheets, every young man wants to die / Say it to the man who profits, and the bastard walks by.”

There’s a lot of pain in 'Skinty Fia', both political and personal. It’s a rare perfect album that combines the two without ever seeming self-righteous. It may not have the big bolshy tunes of the previous two albums, but the sheer force of 'Skinty Fia' makes it one of the albums of the year.