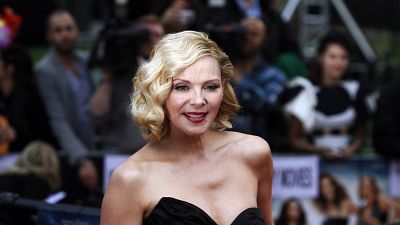 What is Sex and the City without Samantha Jones and her screaming orgasms? It’s a question many fans have asked since the announcement that reboot series, And Just Like That, would not feature Kim Cattrall reprising her iconic role.

The reason for this has been subject to various rumours about cast “feuds”, however in a 2017 interview with Piers Morgan, Cattrall gave the following explanation for not returning to the show:

So what happens to Samantha Jones? Despite fears that she’d be killed off, it turns out she’s actually “thriving” in London following a fallout with Carrie.

“We couldn't have Samantha roaming around New York City and not have the other women (Charlotte and Miranda) not interacting with her. It just wouldn't have made sense,” a source from the show told The Daily Mail.

“Sending her to Los Angeles wasn't an option as we'd done that in the first movie, so having her character based in London really was the perfect way to keep her alive and explain her absence,” they added.

This also leaves the option open for Cattrall to make a return for a second series, which the show creators remain optimistic about.

​​“Samantha Jones is one of television's all-time much-loved characters and Kim is a phenomenal actress who brings her to life perfectly. She needs to come home, if not for us, but for the fans that adore her.”

It isn’t the first time a behind-the-scenes beef has led to beloved characters being written off - then sometimes brought back.

TV shows make us fall in love with characters, even those on the sidelines that keep fictional worlds feeling whole. So how do showrunners manage the sorts of cast conflicts that lead to a hasty on-screen exit?

Here’s a look at some memorable examples.

In May 1985, more than 300 million people around the world watched in horror as Bobby Ewing was killed by a hit-and-run driver.

After seven years of playing the strong-willed yet good-hearted oil tycoon, Patrick Duffy felt he'd reached the limits of his TV persona and wanted to pursue other career opportunities while the show was at its height of popularity. This meant killing off Bobby. Or did it?

Leaving Dallas didn’t lead to the kind success Duffy had hoped. This, coupled with a pay rise and the convenient ‘it was all a dream’ twist, led to a now-infamous shower scene in a pastel pink bathroom suite, where a lathered Bobby turns to his wife, Pamela, and says “good morning.”

Another example of a famous TV character being seemingly killed, only to be brought back to life later on, is flame-haired widow Meg Mortimer from the soap opera Crossroads.

For eighteen years, so-called Queen of the Midlands Noele Gordon played Meg, the show’s most popular character. And what better way to kill off a show than by killing off its most popular character? Or so the thinking went when a new company, Central Independent Television took over, hoping to replace the soap with more expensive drama productions.

What they didn’t plan for was the public outcry after Meg Mortimer was presumed dead in a motel fire.

According to a 1981 news article in The Sun, “hundreds of weeping viewers jammed ITV switchboards demanding to know Meg's fate. And some became so wrapped up in the drama that they phoned hospitals to ask about her injuries.”

This put pressure on the writing team to come up with an alternative - happier - ending, which saw Meg sailing away on the QE2 towards a new life in 1983.

These events are even the subject of an upcoming series from writer Russell T. Davies (It's a Sin), which is set to document the life of Noele Gordon.

From death by hairdryer to bridal gown drowning, there’s no shortage of (ridiculous) ways in which characters have been killed off in British soaps.

In this sense, Eastenders character Kathy Beale got off lightly - an underwhelming off-screen car crash.

At the time, Gillian Taylforth who played Kathy Beale, had been taking an indefinite break from the show and was surprised when the option to return was seemingly gone.

"I was a bit upset at first because it was 13 years of my life and I didn't like the thought of being killed off. I thought she might come back to see Ian and have some illness. But that's the way it goes,” Taylforth said in a 2006 interview with The Mirror.

Luckily, Kathy was to return to Walford, albeit fifteen years since her last appearance. The explanation? A faked death, of course, enforced by her controlling husband Gavin Sullivan, who convinced her it was the only way to keep her children safe.

For seven seasons fans shipped charming believer Fox Mulder and logic-driven sceptic Dana Scully. Their chemistry is at the very heart of the show, so when David Duchovny’s Mulder was suddenly abducted by aliens, viewers still wanted to believe but were left understandably shocked.

According to Duchovny, he decided to leave The X-Files due to his contract ending.

“As much as I love the show, I think for me this will be the end,” he said in a statement at the time. “I always thought five years was enough. Seven years is definitely enough.”

But there's seemingly more to the story, with the actor also filing a suit against 20th Century Fox over syndication revenue, a case that was eventually settled out of court in 2000.

While Mulder did return in parts for seasons eight and nine, fans often debate how his overall absence impacted the show’s ending. Luckily, both Duchovny and Anderson reunited for a reboot in 2016.

Charlie Sheen’s controversial reputation was part of the package when he was cast as Charlie Harper alongside Jon Cryer in Two and a Half Men. The dynamic between the two proved extremely popular, with the comedy reaching 14 million viewers per episode in 2011.

That same year, Sheen was fired because of his “dangerously self-destructive conduct,” Reuters reported and a video went viral of Sheen’s bizarre ramblings about ​​”tiger blood” and “winning.”

It was a messy breakup that resulted in Charlie Harper being killed off for good, yet producers still hoped to bring Sheen back for the final episode: Harper would ring the doorbell, rant into the camera before being killed by a piano falling from the sky.

Sheen refused, and so producer Chuck Lorre got his own back by pretending to be Sheen’s character instead, turning to the camera to say “winning” before being hit by a falling piano.