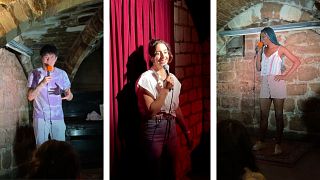 An underground bar, a colorful dimmed light and a stage. The setting is familiar to stand-up enthusiasts. After the crowd gathers for the evening, the host of the show starts warming them up with a combination of witty one-liners and personal anecdotes. The whole thing in English.

So far, so normal. Except this is Paris. Ok, it's the trendy Latin Quartier, in the heart of the 5th arrondissement, but if we're to believe Laura Cappelle, of the New York Times, US-style stand-up comedy is one of the coolest things to catch in the capital.

The French city has became so fond of stand-up that you can attend an English speaking performance every night. “Whether you're just here for a long weekend or you're here in the middle of the week for business, you can come and see a show” explained Sadra Summer, an American performer living in Paris who started stand-up in 2019.

Your intrepid reporter went in search for laughs and discovered a diverse crowd of expats, tourists. But also French people who are curious about the show or who believe it's a fun way to improve their English.

“It’s usually a mix of almost fifty percent of French people living in Paris and then fifty percent expats,” said Terrence Wrong, the host of Blast Off Comedy, a show performed twice a week.

But what does it change for them to perform in English in front of a dozen different nationalities ? Well, not that much.

Terrence Wrong who started stand-up in 2019 after a break-up explains : “Honestly, they're more similar than they are different. I think a lot of people would kind of intuitively think because it's different cultures and the audience must be so different, they won't even laugh at the same things. But at the end of the day, everyone is human. So at least for me, when I do stand up in French, most of the jokes are the same.”

Sentiments shared by Maddie Storm, a French performer who also first picked up a mic to perform 2019. As a Black comic, she points out that most people don't think she's French when they see her. “They assume I'm actually English, American or just African. They don't think I'm French. So, you know, I just don't think about it. I just perform as a human being.”

For Sadra Summer, hosting a weekly show at the Broadway Comédie Café, facing an international crowd adds a little bit of challenge. “Having a mixed audience is stressful but it forces you to be a better writer”. ”It forces you to spend more time writing. It is harder, but it's kind of fun because you can never take the easy way out. If you want to get a laugh, you have to work for it a little bit more.” she adds.

Speaking of the audience, these shows are undeniably a success. Both of the venues Euronews Culture visited were packed. Nico, who's from New York, told us that she wanted to do something fun for her last night spent in Paris. So, she chose to come to the Unstable Comedy show taking place in a little street near le Marais.

“I thought it was great. I thought the audience was great.The performance was great, everything. All the sets were very funny.I like the setting too, it's very cosy in here.” she declared.

Xander, who accompanied her, said he might even drum up the courage to take to stage himself next time.

All the shows are listed on the website : English Comedy in Paris.