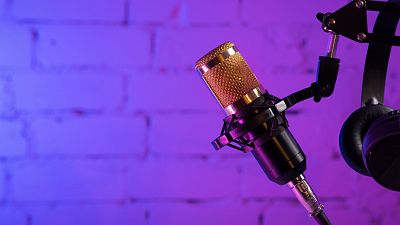 If the warm summer days aren't motivating you to pick up a book, and you don’t have the emotional wherewithal for another streaming binge, Euronews Culture has got you covered.

Following our first round of podcast recommendations to soundtrack your summer, we’re treating you to a new batch of our team’s favourite audio entertainment.

So, whether you’re a die-hard cinephile, a passionate foodie, a theatre lover or fascinated by stranger-then-fiction stories, our list should help you wade through an overcrowded soundscape.

This new blockbuster podcast from the New York Times and the producers of Serial spins a fascinating yarn from a British scandal and the ensuing fallout that rocked a school district in Birmingham in 2014.

That year, an anonymous letter landed on the desk of a local council worker, allegedly from a whistleblower, detailing a supposed Islamist plot to infiltrate local schools. Once leaked to the press, the letter set in motion a national outcry, multiple investigations and the dismissal of 14 teachers accused of introducing an Islamist ethos into their schools - but it appeared no one had ever seriously investigated who wrote it in the first place.

Beyond unravelling this central mystery, part of what makes the podcast work so well is the dynamic between the two journalists / hosts. Throughout, they invite the listener into the process of reporting the story, and their different styles are a captivating study in opposites. Brian Reed, the fish out of water in this context and veteran of podcasts like This American Life and S-town, favours a dispassionate, objective approach to interviews. His partner, doctor-turned-student journalist, Hamza Syed, is British-Pakistani and a Birmingham native. His approach is impassioned, emotional and coloured by his experience as a member of the community being put under the microscope.

The result is a series that interrogates everything from British attitudes towards Muslim communities to media sensationalism. Be warned, it might frustrate listeners looking for easy answers. Aisling Ni Chúláin

Off Menu with Ed Gamble and James Acaster

What happens when two comedians invite famous guests to their Dream Restaurant and ask them for their ideal starter, main course, side dish, drink and dessert? One of the best and funniest podcasts out there, that’s what.

Whether Gamble and Acaster are demanding their terrific range of guests to choose between poppadoms or bread, bickering about cheeseboards, or discussing the merits of still versus sparkling water, their to-and-fro works wonders.

The simple concept invites famous guests let go, chat about their favourite dishes, and share personal anecdotes that you wouldn’t ordinarily get to hear in more traditional interview formats. You can hear Louis Theroux advocating for very small margherita pizzas, Ed Sheeran explaining why medium-fatty tuna Nigiri from Araki is the way forward, comedian Amy Gledhill trying to convince you that seaweed can be served as a garnish on mashed potatoes, or humourist Rob Brydon recounting how singer Tom Jones gobbles down oysters like a Trojan.

Launched in 2018 and currently on its 8th series, Off Menu is audio comfort food that’ll leave you in stitches and have you asking for more. David Mouriquand

Curl up into a ball and pretend it never existed?

In this hilariously crude, award-winning podcast, Morton, along with two of his friends James Cooper and Alice Levine, read and review the surreal and hideously-written pornographic literature of his father.

While much of the podcast’s fun comes from the slaughtering of Flintstone’s awfully constructed plots and dubious descriptions of the female body ("Her tits hung freely, like pomegranates”), the heart of its comedy comes from Morton’s mortification at reading his father’s work aloud.

Reality TV is such an embedded part of the media ecosystem that a time before it seems impossible to imagine.

This podcast goes back to the beginning to analyse why reality TV is the way it is. Journeying through Big Brother, The Hills, the Real Housewives franchise, Love Island and of course, the rise of the Kardashian family, Unreal examines the roots of reality TV and whether it can exist in an ethical way in contemporary society.

This podcast is no puff piece and features some hard hitting interviews on difficult topics like suicide and domestic violence, but has its fair share of lighter moments as well. Part of the fun comes from hearing insider accounts of famous TV moments, but the personalities and professionalism of the presenters while they hold producers' feet to the fire really makes it pop.

Unreal is essential listening for reality TV addicts but could also provide insight for those who are fed up with the genre as to just why they hear about it so often. It’s stimulating enough to be engaging, whilst also being light enough to have fun wherever you are this summer. Timothy Gallagher

Unlike filmmakers, the people behind the scenes in theatre don’t do nearly as many interviews. For theatre lovers, that makes it way harder to get a better sense of what goes into putting huge productions on stage.

The Royal Court Theatre Playwright's Podcast is the perfect way to get that insight.

Originally hosted by acclaimed playwright Simon Stephens and now director Omar Elerian, they interview playwrights who’ve had plays performed on one of London’s most prestigious stages.

With guests including Jez Butterworth, Lucy Prebble, and Jack Thorne, the podcast delves into how some of the most successful playwrights got their start, what inspires them, and how their writing process. Best of all, the interviews go incredibly in-depth into the day-to-day lifestyles of being a playwright and demystify the process.

It’s an absolute must listen for stage lovers and anyone with theatrical aspirations. Jonny Walfisz

Started in 2016 and hosted by LA-based comedians Caitlin Durante and Jamie Loftus, The Bechdel Cast looks at a different movie each week and examines the way women are portrayed through the Bechdel Test.

For those of you who don’t know, the indicator is named after American cartoonist Alison Bechdel, and asks whether a work of fiction features at least two named women who talk to each other about something other than a man.

From Manhattan to Mulan, Love, Actually to Promising Young Woman via The Matrix, you’ll be surprised which films get passing and failing grades.

While it may not be for you if you’re not prepared to reassess your favourite films and their likely lack (or damaging brand) of female representation, the engaging and frequently laugh-out-loud funny discussions are addictive. Durante and Loftus never limit themselves to easy hectoring or dismiss films outright; they unpack the historical, societal and psychological aspects of movies and film culture, without forgetting to have an absolute blast along the way. David Mouriquand

If you enjoy both documentary and conversational podcasts and you’re interested in gender equality you might want to check out our very own, award-winning Euronews podcast, Cry Like A Boy.

In this series, we meet men who defy centuries-old stereotypes on the African continent.

By speaking with men about the societal pressures to provide for their families, risk their lives on dangerous migration routes or go to war, we uncover the lives within underreported communities in Africa and Europe.

You’ll discover testimonies from reformed abusive husbands questioning their masculinity in rural Burundi, and in the episode set in Senegal, you’ll hear an anonymous but very intimate testimony from a young man who has to hide his homosexuality. Today, gay men in Senegal are pejoratively labelled “goor-jigeen”, which literally translates as “man woman”; less than a century ago, the goor-jigeen, were not only accepted but celebrated in society.

And if you’re a French speaker, you can listen to Cry Like A Boy in French. Just type ‘Dans la tête des Hommes’ wherever you get your podcasts. Naira Davlashyan

Supporting trans rights and podcasting: How Suzi Ruffell does comedy