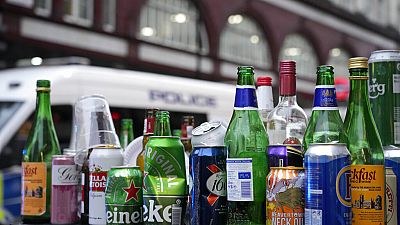 Empty bottles and cans of alcohol left behind by partying Scotland fans in Leicester Square in London, Friday, June 18, 2021 prior to the Euro 2020 Group D match.   -   Copyright  Kirsty Wigglesworth/Copyright 2021 The Associated Press. All rights reserved
By Joshua Askew  •  Updated: 26/07/2022

Like almost every other aspect of our lives, the COVID-19 pandemic has dramatically impacted alcohol consumption across Europe since it swept through the continent more than two years ago.

A recently published report warned that there could be a million extra hospital admissions in the UK over the next two decades due to an alarming increase in home drinking during the pandemic.

But how has alcohol consumption changed in Europe since COVID? Are we drinking less and not as often or are some darker trends afoot?

In July, a report by the Institute of Alcohol Studies found that during the pandemic the number of "high risk" drinkers increased in the UK, along with how much the heaviest drinkers consumed, which is causing health and economic problems.

It noted a 20% increase in alcohol-specific deaths in England in 2020 compared with 2019 - persisting through 2021, even after the lockdowns were lifted.

Not everyone in the UK drank more during the pandemic, however. The study suggested, on average, light and moderate drinkers decreased how much they drank.

"The pandemic's impact on our drinking behaviour is likely to cast a long shadow on our health, and paint a worrying picture at a time when NHS services are already under huge pressure due to treatment backlogs," said Colin Angus at the University of Sheffield, who authored a separate study into the relationship of COVID to alcohol consumption.

The authors of the report warned there could be an extra one million hospital admissions due to worsening drinking habits, costing the UK health care system an estimated £1.2 (€1.4 billion) over the next 20 years.

They said the findings are a wake-up call for British authorities.

The situation was different in France.

Nearly a quarter of French people were found to have reduced their drinking over the pandemic's two years, while for 65% of respondents it remained the same. One in ten drank more during the pandemic.

However, the effects of COVID were felt elsewhere. More than a quarter of smokers increased their tobacco consumption, the survey found.

Its authors cited "boredom, lack of activity, stress [and] pleasure" as the main factors playing a role in the changes in alcohol and tobacco consumption over the last two years in the fifth republic.

Increases for both tobacco and alcohol were correlated with a "great risk of anxiety and depression", it concluded.

Germany, which has one of the highest rates of alcohol consumption in Europe, saw a sizeable surge in number of people seeking help for alcohol addiction during the pandemic.

Enquiries to the country's Alcoholics Anonymous helpline roughly doubled -- from about 10 calls per day to about 20 -- according to the group.

After an initial spike in alcohol sales during the initial phase of the lockdown, many people confronted problematic alcohol use, whether through increased self-reflection or because family members finally became aware of how much they were drinking, according to a Alcoholics Anonymous spokesman.

According to a recent study by the German Center for Addiction Issues (DHS), three million Germans between the ages of 18 and 64 had an alcohol problem in 2018.

"Some people use or abuse the way to work and the workplace as a drinking opportunity, and in many cases this is now no longer available," he told reporters at France 24 in 2021.

"People have to start drinking at home, and then their spouse or family can see how much they really drink. They get to the point where they realise that there is no way to hide it."

Like the UK, the pandemic made Italy's alcohol problem much worse.

Already seeing a fall in the number of tetotallers long before the pandemic, the number of high-risk alcohol drinkers in Italy increased by 24%, as per data released by the Italian Health Institute (ISS) in 2020.

For the first time, teenage girls aged between 14 to 17 years overtook boys in the high-risk alcohol use category, rising to 30.5% while for boys of the same age it was 28.4%.

There were other gendered dynamics to the changing drinking patterns.

A significant increase in the high-risk category was observed for women of all ages up to 60.

The COVID lockdowns, says the ISS report, "led to an increase in uncontrolled alcohol consumption, [alongside] the digital aperitifs on chat rooms and social networks, often in compensation for the tension resulting from isolation, economic problems, work, relationships and fears spread in the population, [which were] certainly made more fragile by the pandemic.”

Alcohol sales increased in online retail and home delivery which increased between 181% to 250% in the country during the pandemic, according to the ISS.

What are the stories behind Europe's iconic summer drinks?