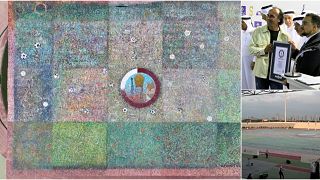 The largest painting in the world entered the Guinness World Records this week when Qatar’s university football field was draped with an enormous art canvas.

9,652 square metres of the football field was covered by the painting called “The story of the ball,” by Iranian artist Emad Salehi.

The previous holder of the Guinness World Record for the largest painting was Sasha Jaffery with an artwork measuring 1,595.76 square metres.

Shaddy Gadd, a Guinness World Records official said: “Emad Salehi achieved the record of 9,652. So this is six times the size of the previous record. So it's a quite an impressive record.”

The theme of Salehi’s artwork is the ball itself - the historical memories of previous world cups, the host countries, the winners, the best players and scorers.

It took Salehi five months to create his painting, spending an average of 14 to 18 hours a day working on it. "You know, this is, the idea about the history which is the ball how it changed until Qatar 2022, and I mixed the culture, it is Arabic culture with different culture in Qatar.

The challenge, you know, because my area that I'm painting in is only 600 square metres but my painting is 9600 square metres. So, when I'm painting in this area, I should be thinking how (will this look) after this. So, because we need to mix all the lines together so the paint don't (sic) become different. Today I only have just seen what I do,” said the Iranian artist.

More than 3,000 litres of paint and 150 brushes were used to complete the artwork.

Qatar is currently hosting the 2022 World Cup, which ends with the final match on Sunday, 18 December.

Best of Qatar 365: From bees to a woman-led business