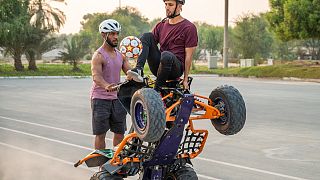 Daring and strange world records have been broken for this year's Guinness World Records Day.

For 'GWR DAY 2022', people from all corners of the planet flaunted their skills in a variety of nail-biting record attempts.

Records were broken on 10 November in the UK, UAE, US, China and Mexico, involving skateboards, somersaults and Rubik's cubes, naturally. They are all amazing feats and listed in no particular order of importance or difficulty!

Most Rubik's cubes solved on a skateboard

George Scholey is a bit of a wizz.

The British skateboarding and puzzle-solving pro broke the world record for most Rubik's cubes solved on a skateboard in London, the UK.

And guess what? Scholey did it in less than an hour - 40 minutes to be precise.

Most blindfolded backwards standing somersaults in one minute

Ever tried to do a somersault? Euronews Culture regularly jumps through hoops but we wouldn't recommend it.

To do one you need to up straight, jump up into the air, while launching yourself backwards, and then land on your feet.

Well, Dinesh Sunar from Nepal is not only a champ at backwards somersaults. He can do them blindfolded.

In Florida, he broke the world record for most blindfolded backward standing somersaults in one minute, performing 21 in under a minute.

Sunar is a gymnast, stuntman and parkour instructor, who holds several other records, such as the most twisting backflips off a wall in 30 seconds - definitely don't try that one.

His journey to Guinness World Record stardom was not an easy one. Growing up in a remote village with no transportation, infrastructure or facilities, Sunar's skills are completely self-taught, using the sandbank of a local river to practice.

"When I was 7 years old, wealthy and upper-caste residents began to get electricity and television in the village," he said.

"They forbade us from entering their home, so I observed from the outside to watch the television."

Peaking through the window, Dinesh discovered actors like Bruce Lee and Jackie Chain, inspiring him to attempt his own stunts.

Most keepie uppies while hanging with one hand

Football takes enough skill as it is.

How about having a go while suspended in mid-air? Or better still on a speeding quad bike?

The first was for the most consecutive football touches while hanging with one hand in 30 seconds, with an unbelievable total of 87.

Second was the most consecutive keepie uppies on a quad bike performing a wheelie (though someone else was driving). Together with Abdulla Saeed Alhattawi, Alkhudhiri managed 87 football touches.

Now that is just showing off.

Over in China, another record was broken, this time on two wheels.

Zhang Jingkun achieved the most bunny hops on the rear wheel of a bike in one minute with 14 in Qingdao, Shandong, China.

Jingkun is a famous climbing bike and mountain bike enthusiast in China who discovered his passion for biking at the age of nine.

Most handstands in one minute by a man and more

He achieved the world's longest single-arm handstand, holding the pose for 1 minute 11.82 seconds, alongside the longest handstand on a rotating platform at 25.78 seconds.

Both were in the men's category, with women having separate records.