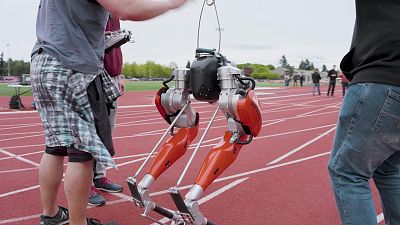 How fast can you run 100 m? The average sprint time for a human adult ranges between 13 and 14 seconds.

Now, a Guinness World Record for the fastest 100 m run by a robot has been set at 24.73 seconds, breaking all previous records.

Cassie, a two-legged robot, clocked the historic time at the Whyte Track and Field Center at Oregon State University (OSU) in the US.

It tottered and traversed the lanes on the track but it completed the 100m course without falling over.

Behind the invention of the first running bipedal robot is a team of mechanical engineering, robotics and computer science at OSU’s College of Engineering.

The research team calls the accomplishment "a big watershed moment".

"This may be the first bipedal robot to learn to run, but it won’t be the last," Jonathan Hurst, chief technology officer at Agility Robotics and a robotics professor at OSU, said.

Previously, Cassie completed a route of 5 km in 2021 in just over 53 minutes.

"We have been building the understanding to achieve this world record over the past several years, running a 5K and also going up and down stairs," said graduate student Devin Crowley, who led the Guinness World Record-winning effort.

Cassie uses machine learning to generate control behaviours and imitates human biomechanics, which according to the research team is fairly new.

"I believe control approaches like this are going to be a huge part of the future of robotics. The exciting part of this race is the potential," Hurst said.

"Using learned policies for robot control is a very new field, and this 100-meter dash is showing better performance than other control methods. I think progress is going to accelerate from here," he added.

In Cassie’s case, it was compressed from a full year to just a week.