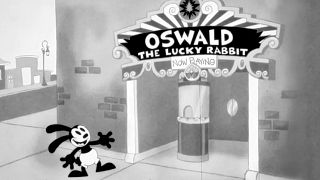 Move over Mickey Mouse, there’s a new sheriff in town.

Disney is creeping up to its centenary, ready to celebrate the anniversary of Walt and brother Roy Disney founding the company in 1923.

It’s been a pretty wild ride of a century for the company.

What started with a handful of charming animated films has come to own several theme parks around the world, almost every major film studio, and a streaming service as one of the most powerful companies on the planet.

Full dominion over what we see, hear and think seems just around the corner for Disney as it seeks to diversify its empire, but for now, the centenary is also offering the company a chance to look back at its more innocent past.

While many may think of Mickey Mouse as the studio’s breakout star, Disney has taken the opportunity to remind the world that it had an animated animal who predates the iconic mouse.

In 1927, Walt Disney was asked to create the studio’s first set of fully animated films for Universal Pictures.

And so, the first films starring Oswald the Lucky Rabbit were born. Oswald would star in 26 films made by the Walt Disney Studios between 1927 and 1938 and while he was a popular character, his life on screen was not without trouble.

Oswald burst onto screens with the animated short film ‘Trolley Troubles’ which featured a young rabbit with pep and charisma. It was a change-up from the initial plan for Oswald which had him as an older and grumpier character.

The original cartoon ‘Poor Papa’ with the older Oswald wasn’t liked by Universal though, and so Walt went back to the drawing board. Poor Papa would be released a year later but by then, Oswald was a star.

People immediately latched onto the cartoon rabbit’s personality and the films boosted the Disney brothers to hire a studio of 20 staff members.

Sadly, Oswald’s career as the star of the Disney brand was not meant to be. In trying to renegotiate a more favourable contract for future Oswald films, Walt Disney found that Universal wanted to move on without his studio.

Even worse for Disney, Universal owned the rights to Oswald. So from 1928, the ability for Disney to create Oswald the Lucky Rabbit cartoons ended.

It wasn’t all bad though. Alongside animator Ub Iwerks, Disney had an idea for a new character. Somewhat similar to Oswald, this cartoon character would be a mouse. Ring any bells?

Mickey Mouse debuted in the film Plane Crazy in 1928. From there, Mickey would quickly rise to become the studio’s prized property and is the most successful cartoon character in history.

Oswald the Lucky Rabbit may have retreated into the corners of history by comparison, but in 2006, CEO Bob Iger made a trade with NBC Universal to have access to the rights to Oswald and 27 short films that Disney had worked on between 1927-1928.

Finally, after 88 years, Oswald was back home.

Now, in anticipation of the company’s centenary, Disney have made a brand new Oswald the Lucky Rabbit short film.

‘Oswald the Lucky Rabbit’ is the minute-long short directed by animator Eric Goldberg and produced by Dorothy McKim.

“On the eve of Disney’s 100th anniversary, it was such a joy to create the first new Oswald short from our studio since 1928,” says McKim.

“Our hand-drawn animation team—including our hand-drawn legends Mark Henn, Randy Haycock, and Eric Goldberg, as well our wonderful team of 2D apprentices—had a ball animating in the style of Oswald’s era.”

Goldberg adds, “Oswald is such a plucky scamp. We wanted to bring Oswald back, and in the short, he literally returns to his original home: the movie screen. We wanted to have Oswald do all of the ‘squash-and-stretch,’ ‘rubber hose’-animation style, celebrating that first generation of Walt Disney’s artists.”