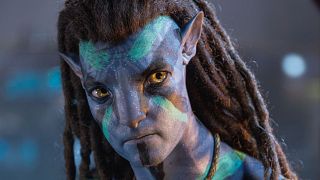 Almost 13 years to the day after launching Avatar, James Cameron joined returning stars of his record-breaking smash hit at the world premiere of its long-awaited sequel, Avatar: The Way of Water.

Released in 2009, Avatar went on to gross €2.6 billion in the worldwide box office, and hold the record for the highest-grossing film of all time, for a decade.

Production on the sequel began back in 2017 - an interrupted journey Cameron admits sometimes made him doubtful the film would ever be finished.

"There were times when we didn't think we'd ever be standing here," the filmmaker said.

"When the pandemic hit, we got shut down for six months. And even then, when we came back to work, we didn't even know if there were going to be movie theatres. So our production bridges that whole period. But, you know, here we are," he said.

What to expect from 'Avatar: the Way of Water'

The three-hour-long  'Avatar: The Way of Water' continues the story of the Na'vi, a race of extraterrestrial humanoids under attack from humans.

Worthington and Saldaña reprise their roles as Jake Sully and Neytiri, now seeking refuge with the reef-dwelling Metkayina clan.

Worthington says he tried to reflect on how Jake has changed in the intervening years.

"Jake's been with the Na'vi a while, so I tried to make him a bit more feral," he said. "Zoe's got a lot of fun jumping around hissing. And then I think as the saga progresses, Jake kind of leans that direction."

Cameron cast Winslet as Ronal, a member of the Metkayina - marking their first collaboration since Titanic which helped cement the actor's global stardom in 1997.

"This was warmer," Winslet confirmed, comparing shooting in water this time, versus the disaster epic.

She went on to describe The Way of Water experience as "just amazing."

"Everything about the experience from the roles that he's created, particularly for women, you know, he creates roles for women that are not just strong, but these women are leaders, they're fearless," Winslet said at the premiere.

"And so to be asked back to play a role of such power was very, very exciting," she added.

While the 2009 movie set the bar high for box office success, producer Jon Landau insists that to him, "it's never about the box office, it's about the audience reaction. And I think this is going to show people how special the movie going experience can be."

Has the return to Pandora been worth the wait?

From the general consensus so far, it looks like the sequel is proving to be a visually stunning epic, that's a better watch than the first film, but maybe a little too long.

Here's what the lucky few who got to see the film in London had to say on social media about the highly-anticipated sequel:

Will there be another film after the sequel?

A third Avatar is already in post-production, and production has begun on a fourth.

Cameron offered an update on their progress - noting their release is not a foregone conclusion.

"Well, that depends on whether we're successful," he said.

When does Avatar: The Way of Water release?

Avatar: The Way of Water is released across most of Europe on 14 December 2022.