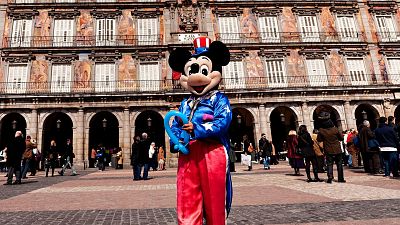 Mickey Mouse is the beloved face of the Disney Brand. Could copyright rules change that?   -   Copyright  syldavia / canva
By Charlotte Elton  •  Updated: 07/07/2022

Disney could soon lose exclusive rights to long-time mascot Mickey Mouse and many more of its beloved characters.

Since his creation in 1928, Mickey has become the cheerful face of the multi-billion dollar Disney brand.

But in 2024 - 95 years after his debut - the unassuming mouse will enter the public domain.

Under US copyright law, an ‘anonymous or pseudo-anonymous body of artistic work’ is only protected for 95 years, after which time it can be used freely.

So what does this mean for Disney - and which well-known characters will it have to share next?

How does copyright law work?

Frankenstein, Sherlock Holmes, Robin Hood and Dracula - Mickey will join a long list of characters that have entered the public domain.

But aspiring creatives beware - there could be serious legal caveats to using the cartoon.

Mickey debuted in a black and white film ‘Steamboat Willie’ in 1928.

Over the ensuing nine decades, his appearance changed: the first Mickey had black eyes, small ears, and a pointy nose. He didn’t adopt his now-iconic red shorts until 1935.

It is only the early version of Mickey that is entering the public domain.

Later iterations of Mickey - variously thin and fat, and with and without eyebrows - are still under Disney copyright. They will enter the public domain at different points in coming decades.

People can now create their own stories with the original Mickey Mouse character. However, there are still legal hurdles like trademark law.

Disney holds Mickey Mouse trademarks for a variety of commercial uses. And while copyright is time-limited, trademarks are not.

"In the case of Mickey Mouse, for example, not only the name but also several drawings are registered trademarks,” writes Martin Senftleben in his 2020 book ‘The Copyright/Trademark Interface’.

"The combination of copyright and trademark claims has become a standard protection strategy in the field of contemporary cultural symbols,” Senftleben adds, “the coexisting trademark protection will be felt, however, once copyright expires.”

So, if it can be argued that a viewer would associate a new creation with the Disney brand, the company could theoretically sue.

Given the strength of the association between Mickey Mouse and Disney and given Disney’s reputation for being ruthless about protecting its intellectual property, many creators will be rightly hesitant to use Mickey’s image any time soon.

Which other Disney characters could expire?

The coming decades will see many Disney characters enter the public domain.

Donald Duck’s screen debut was “The Wise Little Hen” on 9 June 1934, giving the company another six years of exclusive ownership.

Snow White and the Seven Dwarves could enter the public domain within 15 years.

However, much like their friend Mickey, these characters have also been turned into trademarks in certain commercial uses.

In the cases where trademark rights don’t apply, the copyright expiry means that these characters can be used in new - and occasionally disturbing - ways.

The character entered the public domain when copyright expired on AA Milne’s book earlier this year.

The movie sees the friendly bear transformed into a brutal killer. After being abandoned by Christopher Robin, Pooh will embark on a murder spree with best friend Piglet.

It seems the director of the film has managed to escape any trademark infringement by adapting the 1926 version of the character in a way that is clearly distinct from the Disney brand. There is, undoubtedly, little chance of mistaking the below images for one of Disney's children's films.