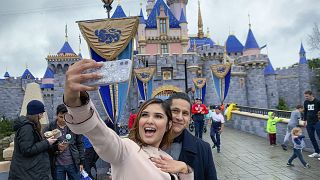 Disney theme parks are trying to keep their superfans coming while keeping the door open for occasional visitors.   -   Copyright  Jeff Gritchen/Orange County Register/SCNG via AP
The opinions expressed in this article are those of the author and do not represent in any way the editorial position of Euronews.
By Giulia Carbonaro  •  Updated: 03/11/2022

Los Angeles-based Leda Knee-Guine has been going to Disneyland since she was five years old, back in 1973.

At the time, visits were a "special annual treat," she told Euronews Culture, but, as an adult, Knee-Guine started going to the theme park regularly and became an annual pass (or 'magic key') holder as soon as she could afford it.

With her daughter, who's also a big Disney fan, Knee-Guine now goes to Disneyland at least twice a month. "If I could, it would be weekly!," she said.

It's people like Knee-Guine, the so-called superfans, whom Disney has been accused of turning against as the company is trying to prioritise occasional visitors with deeper pockets over the Disney-obsessed regulars. It's a tricky balancing act for Disney, trying to keep its theme parks' doors open to newcomers while keeping the regulars who bring in a steady cashflow to the company happy.

In a recent interview with the Hollywood Reporter, Disney chief executive Bob Chapek said that though the company "love the superfans, obviously" these are impeding other, less enthusiastic fans from visiting the parks.

"We've got to make sure that there’s room in the park for the family from Denver that comes once every five years," Chapek said.

In order to do that, Disney has recently suspended many options included in its annual pass, including entry without pre-booking.

"I hate it. It makes me never have access, penalising us for not showing or cancelling later than 24 hours. It's rough. I'm paying for a pass I hardly use," Bri Marie Brower, holder of a Disney parks' annual pass and former Disneyland California Adventure employee, told Euronews Culture.

"I love Disney because it is so magical and fun and was a huge bonding item between my aunt and I, along with my friends," said Brower. "I used to go every week before COVID-19, walking in to get a pickle and popcorn for my aunt before she passed. But after COVID-19 and the new pass system being introduced, I've been going maybe once a month."

Knee-Guine said she was upset about the new restrictions, initially. "But to be honest, I haven't had a problem getting a reservation whenever I have wanted to go. If you try the night before, and keep trying, you can usually find one!," she said.

Trying to understand the Disney hype

The enthusiasm of superfans for Disney theme parks is hard to understand for those who don't love Disney and have never experienced the joy of being immersed in a Disney world. For someone who grew up constantly quoting her favourite Disney films, I personally missed out on the experience of Disney parks for most of my life myself, visiting my first Disneyland at the ripe age of 24.

Coincidentally, most of the superfans who hit Disney parks on the regulars are also adults - often those same Millennials who grew up watching 'Aladdin', the 'Lion King', 'Mulan', 'Toy Story', 'Hercules' and 'Monster Inc' on repeat and are somehow nostalgic about those carefree childhood years spent in front of the TV screen.

My first experience of a rather haunting-looking Disney parade (mostly because I find a 2-meter tall, real-life Mickey Mouse terrifying) was at Tokyo's Disneyland, which I had chosen over Tokyo Sea World against my cousin's recommendation because I wanted an authentic, original experience for my first time at a Disney theme park.

My cousin was the best guide I could have asked for: a habitual visitor of Disneyland, she had the idea of going dressed in massive Stitch onesies, which got us into trouble with the park's employees (who said we could mislead visitors in thinking we were the park’s actors) but somehow allowed us to be shameless about our enthusiasm for the rides.

After that, I visited one other Disneyland and then decided I'd had my fix of Disney theme parks: two was the maximum amount of times I was willing to listen to 'It’s a small world after all'.

But my cousin continues going, hitting the park multiple times a year, dressed in Disney paraphernalia.

The problem is that, despite walking the streets of Disney theme parks covered in Disney-related props, Disney superfans are not the cash cows the company would like them to be.

In the US, holders of the annual pass (€1,317 or $1,299 plus tax) can make up the cost of their subscription by visiting once a month, and will actively be saving money going more often than that. By comparison, occasional visitors pay €110.5 ($109) for a one-time entrance - and are said to spend much more on merchandise.

Brower disagrees that superfans have the habit of taking over the parks and spending less money.

"Visitors- and super visitors-wise, I would see some regulars but I felt there were lots of out-of-state guests too," she said of the time she was working at Disneyland as a cashier.

"I would say as a guest now, I still spend $100+ every time I go with my pass, not including parking if needed. As do my friends when they come. And we've even stayed on property and we only live 10-15 minutes from the park."

'The most terrifying people on the planet'

Thousands of people around the world proudly identify as Disney superfans, and share their love for the company's theme parks and films in Facebook groups, TikTok and other social media. For them, Disney theme parks are more than just a holiday - they're a way of life.

For the rest of the world, they're taking things a little too far: there are several sub-Reddit disparagingly talking about Disney Adults (a term created in the 2010s) as cringey and weird, and one 2020 article from The Tab went as far as calling them "the most terrifying people on the planet".

Millennials and Gen Xers who'd rather live in a Disney world than the real one have been accused of being unable to grow up from childhood and are truly one of the most hated groups of people on the internet, where they're easy targets for all kinds of jokes and memes.

In 2020, a Reddit post with the headline "Disney adults are worse than any other 'cringe' group of people" gathered support, with people sharing their experiences with superfans.

"Everyone talks about kpop stans or teens who are obsessed with any artist in general, but we never talk about Disney adults," the origins Reddit post read. "You're 30 you don't have the spirit of cinderella inside you."

Shortly after, in August 2020, 'Disney Adult' became an official meme on Urban Dictionary.

There's a lot to be critical about Disney, starting from its most well-known, much-beloved films: most of the old princesses in Disney films are seriously lacking in agency, some older films are straightforwardly racist or lack representation, and they all, in general, offer a far-fetched, unrealistic lens to look at the world around us.

The company has also recently controversially dived into the US culture wars, as fans from across the political spectrum pushed for Disney to take a side on Florida's 'Don't Say Gay bill', the legislation introduced by Republican governor Ron DeSantis restricting conversations about LGBTQ+ topics in schools and others.

But at the same time, it feels unfair to judge Disney superfans for the joy they feel for Disney films and products, or to expect them to 'act their age' and curb their enthusiasm.

For many superfans, Disney is literally 'magic', as Brower said. And that magic remains open to anyone to tap into, regulars and occasional visitors alike.