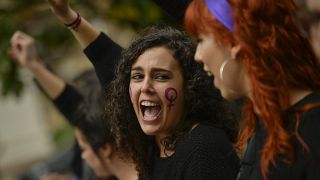 The movement brought about a new awareness of sexual harassment, but real political and legal change has been lacking in some countries.   -   Copyright  Alvaro Barrientos/AP
By Giulia Carbonaro  •  Updated: 13/10/2022

It's already been five years since the #MeToo movement exploded in the US, shaking Hollywood to its core and sparking worldwide conversations about the sexism, sexual harassment and abuse suffered by women across the planet, no matter their industries.

Behaviour that five years ago was commonly considered acceptable, if not merely tolerated as a necessary evil, would never fly on an international stage today, as it used to at the Cannes or Berlin film festivals. But further away from the intense media scrutiny on such high-visibility events, has our society really changed, and if so how?

While in countries like the UK and Sweden the movement found fertile ground in 2017, in other countries like Italy, France and Spain, #MeToo picked up some momentum but fundamentally failed to inspire the same upheaval.

"There was a number of countries, not only in Europe but particularly in Europe, where people said, 'Oh, that's just an American thing', or 'That's just Hollywood'," internationally renowned feminist writer and theorist Cynthia Enloe, now a research professor in Women's and Gender Studies at Clark University in Massachusetts, told Euronews Culture.

"And particularly Italy and France were the hardest to break, to really get people to see that this isn't an American thing. It's not about being prudish about what happens at work."

In Germany, surprisingly, the movement hardly took shape, while in eastern Europe it was almost completely absent. According to Enloe, that's because eastern European countries share a different history than western Europe, one marred by the distortion of feminism by the Soviet era.

The line between seduction and harassment: France

In France in 2017, #MeToo became #BalanceTonPorc, which can be translated into the much more radical "out your pig," an expression coined by New York-based French journalist Sandra Muller. But while the hashtag gained some traction on social media, the French film industry - and French society at large - was reluctant to put itself under the lens of scrutiny inspired by the American #MeToo.

In a now infamous open letter signed, among the others, by actor Catherine Deneuve in January 2018, the French icon and more than 100 French women in the film industry said that the #MeToo movement had become “a witch hunt” and men had the right to hit on women without their flirtiness being taken for predatory behaviour.

France's secrets of seduction, a cliché which weighs on French people around the world but which is also what many foreigners love about the country; should have been protected, Deneuve and her colleagues were saying.

But where do you draw a line between seduction and harassment?

The #MeToo movement "broke the taboo on sexual harassment", according to the Fondation des Femmes, a Paris-based association fighting for women’s rights and supporting victims of sexual violence.

The kind of rejection of #MeToo in the name of letting the 'boys be boys' promoted by Deneuve sparked outrage in France, which forced the actor to apologise to victims of sexual violence shortly after the  controversial open letter's publication.

Since 2017, France has become a country where sexual harassment is taken significantly more seriously.

In 2019, former secretary of state for gender equality Marlène Schiappa passed a law to punish sexual harassment in the street with fines up to €750, while also cracking down on online abuses. For the first time in France, thanks to Schiappa, catcalling became a criminal offence which women could report to the authorities.

But the Fondation des Femmes argues that there's a lack of political action to support the changes in awareness that have already happened in French society.

Since 2017, reported episodes of sexual violence in France have increased by 82 per cent, according to the organisation, and less than one in three aggressors is prosecuted. Every year in France, an estimated 94,000 people are victims of sexual violence or attempted sexual violence, but since 2020 only 732 people have been found guilty of committing violence.

There have also been other, more symbolic setbacks: the case against director Luc Besson, one of the most prominent figures in French cinema to be accused of rape in 2017, was dropped last year.

#YoTambien and the 'Wolf Pack' trial: #MeToo in Spain

In Spain, #MeToo became #YoTambien, a direct translation of the original hashtag, and #Cuéntalo, a direct invitation for women to talk about the harassment and violence they had been subjected to.

This feminist movement really took on in the country after the verdict of the infamous "La Manada" or "Wolf pack" trial of 2018, where the court failed to convict five men for gang-raping a young woman in Pamplona in 2016.

As rape wasn't legally defined in Spanish criminal law, the five men were found guilty of the lesser offence of "sexual abuse." Even more chillingly, the court found that the five men had not used violence to coerce the woman as she was not seen resisting what in fact was clearly a violation in itself.

The controversial verdict sparked massive protests in Spain and led to the court changing its verdict a year later while also increasing the men’s sentence from nine to 15 years each in prison.

Even more importantly, the case led to a permanent, significant change in Spanish law. This year, Spain's congress passed the "only yes means yes" sexual consent law which says consent cannot be assumed by default or by silence only.

One of the first people who pointed the finger at Hollywood’s producer Harvey Weinstein, who eventually received more than 80 accusations of rape and sexual harassment, was Italian actor Asia Argento, daughter of director Dario Argento.

While Argento became one of the leading figures of #MeToo, her position in the movement later became rather difficult as she was found to be accused of having sexually harassed an 18-year-old actor and rock musician when she was 37 years old.

But it's not just the figure of Argento that led to scepticism towards #MeToo in Italy. Though writer Giulia Blasi launched #Quellavoltache in 2017, "that time when," asking women to come out with their stories of sexual harassment and talk about their experiences of not been believed when reporting on such cases, "#MeToo never really reached Italy," Italian journalist Jennifer Guerra, author of two books on feminism and gender politics, told Euronews Culture.

"Apart from the case of Fausto Brizzi, which fizzled out after a bit, and what happened in the theatre world, where there have been some developments, nobody in Italy opened Pandora’s box," she said.

Guerra believes as "gender violence is a phenomenon that knows no boundaries," it is impossible that not a single Italian celebrity was found to have committed major sexual violence or harassment. Guerra rather believes that the movement was greeted with a lot of hostility by the Italian media.

"When cases involving famous or influential people came up, we witnessed actual defamation campaigns trying to discredit those who had reported being victims of violence or harassment," she said. "Famous and well-respected journalists didn't have any scruples calling those who denounced sexual violence mythomaniacs or people looking for attention, and always put the reputation of those accused first."

But Guerra thinks that something has changed in Italy since the explosion of #MeToo, especially among young women.

"We have less tolerance for undesired and harassing behaviour, we have learned how to recognise them and we have a new language to define them," she said. "Sadly, this growth in awareness from the public hasn't been followed by an adequate response from the media, the intellectuals and the political class."

What can we make of #MeToo today?

There's no doubt that #MeToo contributed to creating a new awareness of what sexual harassment is, and has taught us all how to recognise it, point it out and refuse to accept it as a necessary, negligible evil.

The biggest change the movement brought about, according to Enloe, is public awareness.

People in South Korea - where #MeToo had a massive impact - used to think someone working in a major television station was “lucky to have the job”, Enloe said. Now, people think a woman should also be able to do her job properly and fairly, without being harassed.

"And that switch from 'She's lucky to have the job' to 'Well, she's skilled and she should be able to do the best she can do without being interfered with by some jerk who's her boss or who has more influence than her at the station' - is a real shift, and I think that shift is really hard to bring about," Enloe said.

To trigger such a change, a "gutsy, daring kind of effort" was taken over by "women who were not well-known at all," Enloe said, pointing out that while the #MeToo movement really exploded in Hollywood it was really picked up by normal women away from the spotlight.

In fact the social movement began back in 2006, when New York youth worker Tarana Burke decided she would bring together other activists and survivors of sexual violence.

More than a decade on, people started to look more closely at the dynamics of powers in the workplace and public spaces and to put into question who was given impunity when committing abuses (the answer: powerful men).

"The people, what they used to tolerate or shrug off or trivialise, they don't anymore," Enloe said. "And that doesn't go away."

Sexual violence and harassment also haven't, unfortunately, gone away. This is why, Enloe said, the feminist movement now has to keep up the pressure to continue its fight against abuses - even beyond sexual harassment alone.

"Now that we're in the midst of multiple crises, I think the women's movement of all sorts will take on climate change as a feminist issue, which is so much about masculinity, distorted forms of masculinity that have gotten us to this terrible crisis in the environment," Enloe said. "And to take that on will take all the kind of feminist energy and feminist thinking that we all can muster."

Five years later, the movement has far from fizzled out.

"Like any movement, it kind of burbles along underneath the headlines and then it bursts into public view when something particularly outrageous happens or is made into a story," Enloe said. "But that doesn't mean it's not existing. Social movements aren't always big in the headlines, but that doesn't mean that women aren't talking about it, aren't trading stories, aren’t figuring out what they should do next."