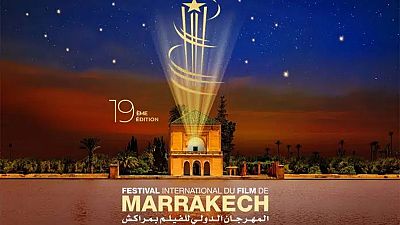 After a two year hiatus due to the Covid pandemic and the subsequent health restrictions, the Marrakech International Film Festival is back with enormous style and panache, and a glittering rollcall of stars - the perfect cocktail for cinema in the sun and sand.

Since its creation in 2001, the Marrakech Festival has continued to grow to become one of the most important film events on the African continent, an unmissable festival on the map of international counterparts.

The biggest names in cinema have come to Marrakech for 20 years, from Martin Scorsese to Francis Ford Coppola through to Iranian master storyteller Abbas Kiarostami.

If you want to start your own database then please add the following European filmmakers: Emir Kusturica, Milos Forman, Roman Polanski and Cristian Mungiu. And there has been plenty of talent from across Africa too, including Yousry Nasrallah, Tawfiq Saleh and Youssef Chahine.

Actors and actresses from all over the world are also welcome in Marrakech as the festival aims to be truly borderless from Hollywood to Bollywood. Among the stars who've graced the red carpet in the sand are Bill Murray, Robert Redford, Forest Whitaker, Sir Sean Connery, Marion Cotillard, Sharon Stone, Jessica Chastain and Sigourney Weaver.

In short, the great and the good from far and wide.

Tributes are what you need

It is not without surprise that this year's programme is centered on paying tribute to four great stars of cinema from four continents:

The iconic Scottish actress presents several films including the rare Orlando (1992) almost marking her film debut, and her latest opus, The Eternal Daughter by Joanna Hogg, recently in competition at the Venice Film Festival. There's also the sublime Only Lovers Left Alive by Jim Jarmush - who's also in Marrakech for the occasion.

The great American filmmaker was in the city for the opening ceremony and on hand to present a retrospective of his films. This includes his latest work, Armageddon Time, afilm cruelly overlooked at the Cannes Film Festival.

The Bollywood mega-star comes to Morocco with the whole team of his latest film, Gully Boy. The 38-year-old star, who has millions of fans in the Indian subcontinent, was at the heart of a scandal this summer after posing nude for an American fashion magazine, Paper. He was one of the winners of the applause meter for the opening night, draped in a lush-coloured ensemble.

The Moroccan director, producer, screenwriter, writer and journalist has traveled to the four corners of her country to show and transmit the stories that populate it. A great lady of Moroccan cinema, finally a prophet in her country.

The organisers of the festival have big ambitions, especially for the general public who can, as tradition, enjoy free outdoor screenings at nightfall on the largest and most famous square of the city, Jeema El Fna, where tourists mingle with the locals in a joyful hubbub.

There are 10 screenings every day during the festival, with great films from all continents - from the very Bollywood Almost Love to the sci-fi blockbuster Dune, the latest opus of those too-cute-for-words Minions in Minions: The Rise of Gru or the recently released hilarious Moroccan comedy Al Ikhwane.

It's good to talk. And listen

Film lovers are not left out. There are no less than 10 meetings, also completely free, with artists from the cinema world that the Marrakech Festival organizes under the title "10 big names of cinema in free conversation in Marrakech".

If you love to name-drop, then prepare yourself for this list - a veritable feast of who's who.

There's also Marina Foïs, one of the most interesting French actresses of her generation, who plays in one of the best films of the year, As Bestas (The Beasts) by the Spanish filmmaker Rodrigo Sorogoyen.

The list goes on. Leos Carax, living myth of French auteur cinema; Gabriel Yared, the Franco-Lebanese musician and composer awarded at the Oscars; Ashgar Fahradi, the multi-award-winning Iranian filmmaker at Berlin, Venice, Cannes and the Oscars; and iconoclastic actress and director Julie Delpy.

At the heart of the event, the official competition, dedicated to discovery since only first or second films have been selected by Rémi Bonhomme, a first class cinephile. He was previously the general coordinator of La Semaine de la Critique, incubator of up-and-coming talent.

They'll have to decide between the 14 films from all continents, reinforcing what could be the motto of the Marrakech festival: Discovery and diversity.