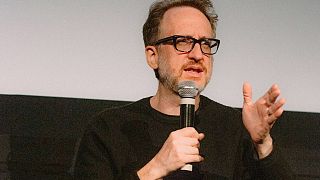 He’s been to the Amazonian jungle with Robert Pattinson in The Lost City of Z and to deep space with Brad Pitt in Ad Astra. Now, American writer-director James Gray is returning to his native New York City for arguably his most personal film to date: Armageddon Time.

Having screened at this year’s Cannes Film Festival and currently showing in cinemas, Gray’s eighth feature film is a deeply empathetic autobiographical coming-of-age drama about growing up in Queens, New York City in the 1980s.

The film features an all-star cast including Anthony Hopkins, Anne Hathaway and Jeremy Strong, and focuses on the strength of family and the generational pursuit of the American Dream. Gray also uses the New York school system as a symptom to expose structures of racial privilege which still hold contemporary resonance today.

Euronews Culture sat down with the director during the Lumière Film Festival in Lyon to discuss the role of the artist in commenting on the world, as well as his fears for the lifespan and culture of moviegoing, and how the Hollywood machine is losing its nerve.

James Gray: It depends on who you ask! I say the birthplace of cinema is here, but the birthplace of narrative cinema, where is that? You know, one of the things that you learn – at least I did – when you get old is that the idea of a genius is bullshit, because Freud needed Jung, John Lennon needed Paul McCartney… And cinema has a thousand fathers.

JG: We hope it never ends. It’s a mistake to think that an artform will exist forever, right? I look at opera and it’s a very strange history – 1925 rolls around and all of a sudden Puccini dies and the medium is more or less kaput! With cinema’s story, we don’t know. It’s such a young artform but now I see other influences – video games, more active aspects of similar artforms, and you wonder whether they’ll combine into something else. Maybe beautiful but maybe not. I don’t know.

EC: Maybe it’s the transformation of our own eyes through art. Yesterday cinema; tomorrow, who knows?

JG: If you had told me 30 years ago where movies would be today… In the American system, you only have basically one kind of movie that can get made: superheroes. I would have told you that you were crazy! But here we are. It could change overnight though - that’s one thing you learn about culture in general. It’s really exciting. I remember reading somewhere – let’s say you were in 1962 or 1963 and the music was all Acker Bilk and the movies were all Doris Day and Rock Hudson… And then within a three- or four-year period, you have The Beatles, Bonnie and Clyde and an ocean of new and stranger works or art that you never would have anticipated. So, who knows?

“We all do our little thing to contribute to a collective catastrophe.”

EC: Armageddon Time is about that in many ways – we’re back in the past and at the same time, you’re talking about the present…

JG: Sometimes you need a little distance. If I start making something that’s “topical” – what’s fresh today is rancid tomorrow. Maybe the distance of the past allows us to see things more clearly today. That’s the hope anyway. I don’t think much has changed since then, and yet a lot has changed.

EC: You talk about racial privilege and social inequalities but the film doesn’t feel moralizing. Was this a tricky balance to get right – to show without hectoring?

JG: It’s very easy to say somebody else is an idiot. It’s very easy to say how smart you are. Social media has brought that little trick to us – cancelling people, talking about how stupid another person is. We’re very good at that as a species. I think that’s too easy. It’s almost like the malevolence of the system is marbleized throughout – it’s not one cause or one person. History is like peeling away the layers of an onion – you can never get to the core of it, it’s endless. And so, (with Armageddon Time) I was trying not to say anybody is at fault. It’s not about that. We all do our little thing to contribute to a collective catastrophe.

EC: In Cannes, you mentioned that it is the role of artists is to pose questions, to shine a light but not to give a moralizing lesson…

JG: Did I say that? That’s pretty good! I think it’s true – it’s not our job to come up with solutions, not our job to instruct. I was just trying to show with as much honesty as I could a period of my life without judgement. The judgment comes anyway – because the story does the work for you. People who want judgement in the art, people who want a moral position from the art, either are very bad artists or very bad critics. Unfortunately, they exist in huge numbers.

EC: Do you think that nowadays, it’s harder to put out a film without people feeling the need for that film to tick certain boxes, to become an activist tick-box that needs to comment, as opposed to leaving room for storytelling to breathe?

JG: It’s almost impossible. The problem is that once you face a situation where this sort of thing is so difficult, it already becomes inculcated by and for another tradition. They look at these kinds of movies as oddities, curiosities – or sometimes worse, as films to be hated or shunned. But I don’t care about that. Whenever I do something, I can’t think about that kind of thing at all – I just try to focus on honesty.

“Unfortunately, the Hollywood system has done a fantastic job in forcing its own idea of what cinema is and should be on the rest of the world”

EC: What is your position today about movies and what they represent for audiences?

JG: I would love to sit here and tell you about my optimism. Unfortunately, you’re not catching me at a very optimistic moment. Part of the problem is when the market becomes God and there’s nothing as a counter weight. Corporations begin to consolidate their power and it begins to train people in thinking about their own expectations.

Unfortunately, the Hollywood system has done a fantastic job in forcing its own idea of what cinema is and should be on the rest of the world. It’s going to take a concerted effort over many years to keep making films that push the envelope a little bit, and I just hope that the audience comes back. On that, I have a little optimism. Because I feel as though there’s always room for something different. Every now and then, a crack widens and finally a dam breaks. We just haven’t had that dam break for quite some time now.

EC: European cinema entries are at an all time low and you’ve been very outspoken about Hollywood studios being more and more risk averse. Even during The Lost City of Z, you mentioned that it was a hard film to get financed and put together… Where are you seeing the hope?

JG: I say this without any pride at all, I’ve done very well at predicting where cinema would go since the mid-1990s – I hope that my current feelings are totally wrong.

The idea of sitting in a theatre with a lot of other people, which we regard as glorious – and I think rightfully so. Because you can’t press the pause button, the collective experience does matter, as does the size of the screen, your identification with that image, which makes it ever more dreamlike… Maybe the machine will be too costly and it will come to a close. I mean, how many people now know how to manufacture a church like Notre Dame? Nobody really.

New York City had a program because St. John the Divine, which is a beautiful church, had not been completed. They had to train people in the art of basically finishing the church. And they just recently discontinued the program. It’s like certain kinds of art don’t live forever. So, are we facing the death of mainstream cinema? It is a possibility. Will it be around in 10 years? I don’t know. I’ll do everything I can to fight for it. I’ll keep doing what I do. The rest is not up to me.

Armageddon Time is out now in US and European theatres.

Check out the video above for extracts of the interview during the Lumière Festival 2022.

Daniel Brühl: "No one wins in a war – even the winners”