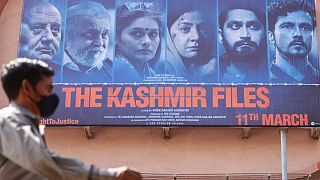 Poster of The Kashmir Files, a divisive film at the heart of the controversy surrounding Nadav Lapid's comments   -   Copyright  Reuters
By David Mouriquand  •  Updated: 30/11/2022

Acclaimed Israeli filmmaker Nadav Lapid, head of the international jury at the International Film Festival of India (IFFI) in Goa, has caused outrage at the closing ceremony of the festival.

Lapid, who won the Golden Bear in Berlin in 2019 for Synonyms and shared the 2021 Jury Prize in Cannes for Ahed’s Knee, criticized the inclusion of a controversial film, saying that The Kashmir Files was "propaganda and vulgar" and that he was “disturbed and shocked” at the screening of the film.

"It seemed to us like a propagandist movie inappropriate for an artistic, competitive section of such a prestigious film festival," he said.

The remarks saw many accuse the award-winning filmmaker of being insensitive towards the suffering of Kashmiri Pandits, who were forced to flee at the height of militancy in the 90s.

Amit Malviya, a senior leader of the Hindu nationalist Bharatiya Janata Party (BJP), compared his remarks to denial of the Holocaust.

“For the longest time, people even denied the Holocaust and called Schindler’s List propaganda, just like some are doing to Kashmir Files,” said Malviya.

Naor Gilon, Israel’s ambassador to India, said he was “extremely hurt” by comments made by Lapid and that the filmmaker “should be ashamed.”

“I’m no film expert but I do know that it’s insensitive and presumptuous to speak about historic events before deeply studying them and which are an open wound in India because many of the involved are still around and still paying a price,” Gilon continued. He also accused Lapid of inflicting damage on the growing relationship between India and Israel.

Still, Lapid doubled down on his comments following the criticism, stating that "someone has to speak up" and that his comments were made in the spirit of “critical discussion, which is essential for art and life.”

The Vivek Agnihotri-directed film was released in March to great success - it has earned more than $43 million so far (on a budget of $2 million), making it one of India’s highest-grossing films this year.

The 170-minute film is largely set in the 1990s, when attacks by militants led to the migration of most Kashmiri Hindus from the Muslim-majority disputed region. It follows the fictional story of a university student who discovers that his Kashmiri Hindu parents – known as Kashmiri Pandits – were not killed in an accident but by Islamist militants.

The Kashmir Files was endorsed by Indian Prime Minister Narendra Modi and promoted by his BJP party by offering it tax breaks.

Its supporters praised it for speaking the truth about Kashmiri Hindus:

Critics have said the exploitative film was full of factual inaccuracies and aimed to stoke anti-Muslim sentiments at a time when calls for violence against India’s minority Muslims have increased.

IFFI is organised by the government-run National Film Development Corporation of India and the state authorities in Goa.