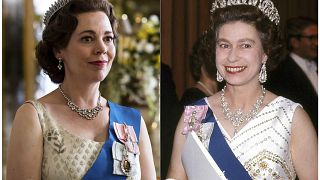 Olivia Colman portraying the Queen in the third season of 'The Crown'(L) and Queen Elizabeth II at the Sydney Opera House in Sydney, Australia   -   Copyright  AP/Netflix   -
By Theo Farrant  •  Updated: 13/09/2022

Following the death of Queen Elizabeth II, the UK's longest-serving monarch, Netflix's hit series 'The Crown' has seen a huge surge in popularity.

The Crown chronicles the life and reign of the Queen, beginning in the late 1940s before she ascended to the throne in 1952.

The series depicts the significant political and personal events throughout the Queen's time as monarch, from her relationship with Winston Churchill during the post-war era to her interactions with Margaret Thatcher in the course of her 11-year run as prime minister.

How much has the show surged by since the Queen's death?

According to data analysis from Whip Media, viewership of the Emmy-winning drama increased by more than 800% in the UK over the weekend.

Viewing figures also skyrocketed in the US, France and Australia: the numbers quadrupled in the US between 9 and 11 September, while they tripled in France.

Globally, viewership was nearly four times higher this past weekend following the British monarch's death, compared to the previous weekend.

Furthermore, The Crown's showrunners announced that filming for the show's sixth season has been temporarily suspended out of respect for Her Majesty the Queen.

Season five of the series is set to premiere in November, where Imelda Staunton will take on the role of the Queen, previously portrayed by Claire Foy and Olivia Colman.

The Crown is back: Here's what you need to know

Was a new global audience record set for the Queen's funeral?

Blade Runner 2099: why has Amazon greenlit the new series?