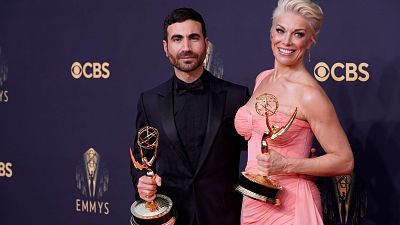 Netflix and Apple TV+ swept the top awards at the 2021 Emmy Awards on Sunday in a first for home viewing streaming platforms.

Netflix series The Crown, which presents a fictionalised account of the life of British monarch Queen Elizabeth II, took the award for best drama along with ten other prizes. Netflix won 44 awards in total at Sunday's event, equalling an all-time record set by US TV network CBS in 1974.

Ted Lasso, a comedy series following an American coach's attempts to revitalise a struggling football team in England, won seven awards for Apple TV+, the streaming service launched by the tech giant in 2019

Sunday's Emmy Awards marked the first time that programmes made for streaming platforms had won all three of the top awards for TV series.

Netflix's 44 awards were followed by a combined total of 19 for premium cable network HBO and its streaming platform HBO Max, one of which was for a co-production with UK national broadcaster the BBC.

In all, five of the eight series nominated for the outstanding drama and outstanding comedy categories, as well as three of the five nominated for best limited series at this year's Emmy Awards were produced for streaming platforms.

The distribution of honours at the United States' biggest television awards reflects the scale of competition for viewers in a crowded field of streaming platforms that now includes some of the world's largest tech firms.

Last week, Apple took the opportunity to show off its streaming service at the launch event for the company's new iPhone 13 and Apple Watch.

The event, which the company dubbed "California Streaming," kicked off with Apple CEO Tim Cook presenting a sizzle reel of trailers and teasers for new programmes coming to Apple TV.

Along with wins for Apple TV+ and Netflix, Disney's streaming service Disney+ won awards for WandaVision and The Mandalorian.

Ted Lasso executive producer and co-creator Bill Lawrence thanked the team at Apple including "T-Dog," which he joked was his nickname for company boss Tim Cook.

William Horberg, executive producer of chess drama The Queen's Gambit thanked Netflix as he accepted the limited series honour. "You guys did the rarest thing of all these days. You took a chance on risky material and you trusted the filmmakers," he said.

HBO, which dominated the Emmy Awards in the years before the rise of its online rivals, took home 19 awards on Sunday.

The premium cable network entered direct competition with Netflix in Europe when it launched HBO Nordic in 2012, enabling viewers in Denmark, Finland, Norway and Sweden to stream its programmes online.

Earlier this month, HBO revealed that it would bring its US streaming platform HBO Max to Europe, launching in the Nordic countries, Spain and Andorra in October.