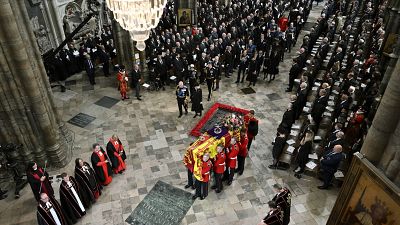 King Charles III, Camilla, the Queen Consort and other members of the Royal family follow behind the coffin of Queen Elizabeth II   -   Copyright  Gareth Cattermole/WPA Rota
By Jonny Walfisz  with AP  •  Updated: 21/09/2022

On 19 September 2022, the streets of Britain stilled as the country tuned in or turned out for the funeral of Queen Elizabeth II.

11 days after her death, a national period of mourning came to a close as the Queen was taken to her final resting place at Windsor Castle's Royal Vault in the King George VI Memorial Chapel.

Perhaps you were one of the thousands who patiently waited in line for up to 30 hours to pay their respects before the ceremony? Maybe you followed the historic event via our live coverage or elsewhere online. You certainly were not alone of course, but exactly how many people did watch?

In the lead up to the funeral, some British newspapers quoted estimates that it would become the single most watched televised event ever. An estimate figure of 4.1 billion viewers globally has been used by nearly all the major outlets.

But if more than half the planet did watch, then it's still unclear where that figure comes from. If true, it would be the most watched event in history, surpassing the 1996 Atlanta Olympics opening ceremony of 3.6 billion viewers.

The source of the bizarre estimate has been used by The Tab as from The Metro. The Metro quotes a royal expert, Richard Fitzwilliam, who said “billions will watch it” but nothing to show that’s not hyperbole.

The Express and Wired are at least a bit more clear on who they’re quoting. Both papers cite Carolina Beltramo, a TV analyst at WatchTVAbroad.

But WatchTVAbroad is just a website dedicated to pointing viewers in the direction of the right VPN for watching a show not televised in their country. And Beltramo, according to her LinkedIn page, is an Argentinian content writer without obvious access to those kinds of data trends. It’s unclear how either would be a reliable source for such a figure.

Who came to show their respects?

The seemingly fabricated viewing expectation was in many ways quite fitting for a funeral that put the UK and much of the world into a dizzying state of hysteria.

National pomp and circumstance was at an all time high for the 11 day mourning period.

For four days, an endless stream of Britons joined a queue that snaked for eight kilometres around the streets of London. Some of the estimated 250,000 queuers waited upwards of 30 hours to stand momentarily beside the monarch’s coffin.

Tim Gallagher wrote about the peculiarities of the British love of queueing for Euronews here.

For the funeral itself, 2,000 guests attended the ceremony. Few events in recent memory have had such a VIP turnout.

The guest list was trimmed down once the Queen was taken from the funeral service at Westminster Abbey to her final resting place in Windsor Castle. 800 people attended a committal service later Monday at St George’s Chapel.

But all these figures pale in comparison to the million people that were estimated to visit London yesterday for the funeral.

5,949 military personnel took part in the ceremonies from her death to burial and over 10,000 police officers were also enlisted to preside over the funeral.

Who tuned in to watch?

For the funeral itself, 125 cinemas around the UK opened their doors to broadcast it live.

The actual viewing figures of the funeral around the world is yet to be worked out. This author seriously doubts the 4.1 billion estimate that has been quoted by many domestic news outlets.

Even so, it was likely watched by a huge number of people. TV channels around the world stopped their programming to broadcast the funeral.

In the UK, all the major TV stations showed the funeral, aside from Channel 5 which opted to show ‘The Emoji Move’.

The total viewing figures for the UK was around 28 million people. The viewership peaked at around 20 million people as the Queen's coffin was carried through the street from Westminster Abbey.

The BBC says 32.5m viewers watched at least three minutes of its coverage.

“It’s a historical moment ... and I didn’t want to miss it,” said Manchester area resident Natalie Dotson told AP. “So we found an English pub on Google. And then we’ve just come in today to watch (the funeral).”

In Germany, public broadcasters ARD and ZDF dedicated hours of detailed live coverage and commentary, as did private all-news channels — though at least one of those later switched to a live shot of the hearse on one side of the screen while business as usual resumed on the rest of it.

Many Spanish viewers were mostly intrigued by the appearance of former King Juan Carlos and his wife former Queen Sofía sitting beside current royals Felipe and Letizia. The two couple have not been seen together in public since Juan Carlos unexpectedly left Spain in 2020 amid financial scandals.

South Africa’s national television broadcaster SABC carried the funeral live as its headline story, even amid rolling electricity cuts across the country that have dominated the news for days. Radio stations also led with news of the procession.