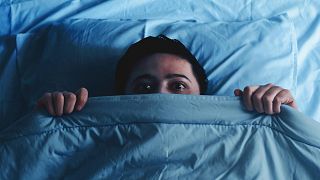 It’s Halloween, and dreams are turning into nightmares.

If you are a fan of films that make you jump, or just can’t stop yourself from gorging on gorgonzola before bedtime, you may enjoy the odd nightmare.

But new research has found a troubling link between nightmares and early onset dementia.

Euronews Culture spoke to a nightmare researcher on that link, and also got the downlow from a dream psychologist on how to interpret any dreams you might be less than pleased with.

Dr. Abidemi Otaiku is a clinical fellow in Neurology at the University of Birmingham. His latest study ‘Distressing dreams, cognitive decline, and risk of dementia’ looks at the link between recurrent nightmares and early onset dementia.

For the study, Otaiku looked at a data set of over 3,000 people, analysed for up to nine years of their lives.

No one going into the study had dementia. But some of the people were having nightmares.

Otaiku found that the people who had nightmares every week were four times more likely to experience cognitive decline, which leads to dementia. It was even more dramatic in older men than women, with the men five times more likely.

Although bad dreams and nightmares are terms often used interchangeably, Otaiku makes a distinction. “We call that the awakening criterion,” he says.

It’s important to point out that Otaiku’s study hasn’t made conclusions about whether having nightmares causes dementia, or if nightmares are just an early warning sign.

What research is finding though, is that there might be a link between the ways our brains are structured and function and the dreams we have.

“One hypothesis is that individuals who have frequent nightmares, irrespective of their daytime mood, may have reduced function in the right frontal lobe, the part of the brain that helps you to control your negative emotions when you're awake, and also when you sleep,” Otaiku explains.

If you are someone who regularly has nightmares though, these links might be worrying.

People with PTSD and other forms of trauma are likely to have troubling nightmares. Otaiku notes the crossover. “Maybe trauma causes nightmares, and it causes dementia too, so that might be the real link,” he says.

Reducing the nightmares you do have is surely a priority, even if just to get a better night’s sleep. Well, there might even be something you can do about that

The content of our dreams are often continuous with the contents of our daytime lives. “If we're stressed, if we're anxious, maybe we're going through a period of low mood, negative mood in the day can oftentimes feed over into the nighttime and in fact give you nightmares,” Otaiku says.

Understanding the way that our daytime lives interact with our asleep selves is the focal point of dream psychologist Ian Wallace’s career.

In our call, Wallace is quick to point out the two kinds of dream interpreter he isn’t. Firstly, he’s not a neurologist looking at scans of brain activity, who are “good up to a point”. Secondly, he certainly isn’t the “psychic guru” type, who will “make some stuff up so you give me some money.”

Instead, Wallace uses dreams as the starting point of a therapeutic practice to understand the complex waking mental states that the images and emotions of dreams represent.

Sigmund Freud was one of the first psychologists to try to interpret dreams. He believed dreams were wish fulfilment. More recently, Alan Hobson believed the brain is firing continuously and that dreams are just our way of making sense of the onslaught of data. Now, studies have shown that similar areas of our brains are active while dreaming as they are awake, making the experiences feel real.

“If you’re awake and you’re angry with me, you might say ‘I'm absolutely fuming with you’. Or you might say ‘I will positively abrupt’,” Wallace says. But in both cases, you’re neither on fire nor an actual volcano.

The way people speak is littered with metaphor to communicate emotion, he points out. Dreams are no different, it’s just more often a visual medium.

“Someone might come in and say ‘I'm feeling a bit down, a bit depressed’. And then I start asking them about their dream imagery. They might say, ‘Well, I was in this dream, I was just in this really desolate landscape or I was under a dark cloud.’”

“I'm looking out for things that have a symbolic significance, that I can connect to some emotional state,” Wallace says.

Research by neurologists Stanislas Dehaene and Benjamin Levy point to the vast majority of our brain’s work being unconscious, with a single digit percentage likely contributing the conscious amount.

Bad dreams are most likely to represent real life stresses in our waking lives that become a part of our unconscious representations while asleep.

“Usually what happens in a nightmare is the intensity of the dream reflects the emotional significance of something that's happening in your waking life,” Wallace says.

“A lot of people still have this belief that that dream happens to you. But the reality is that you happen to the dream,” he says.

What he means is we are the authors of our own dreams, which means we aren’t as helpless as we may think to have our nightmares. For his clients who suffer from nightmares, Wallace teaches a method of lucid dreaming.

Lucid dreaming is when the dreamer becomes aware they are dreaming. Waking up from a nightmare is a form of lucid dreaming, as it’s our mind’s way of saying ‘I’m not enjoying this, get me out’.

Instead of trying to wake yourself, Wallace advises trying to remain lucid and remaining in the nightmare.

“If you're being chased by some horrific monster in your nightmare, and you're trying to wake yourself from it. Then you can instead of coming out of the nightmare, you can face whatever is pursuing you and you can make it bigger, make it smaller, make it brighter, make it darker, make it closer, make it further away. At that point, you realise that you have influence over this emotional situation and you can do something about it,” he says.

The importance of tackling your nightmares in this way isn’t just to make the nightmares more pleasant, it’s to change your waking life too.

Once you start taking control of the narratives circling your head while you’re asleep, you’re more able to control your emotions in day to day activities.

“Usually people don’t know why they’re not feeling great, or they don’t want to admit it to themselves. That’s what we’re trying to get to and identify,” Wallace says.