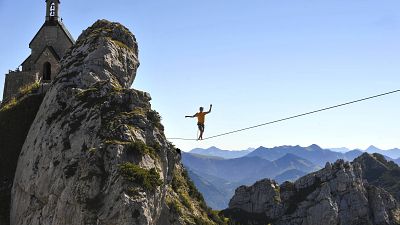 A Slackliner walks on a highline at Wendelstein mountain near Bayrisch Zell ,in the Bavarian Alps, southern Germany   -   Copyright  Uwe Lein/Copyright 2012 The Associated Press. All rights reserved. This material may not be published, broadcast, rewritten or redistributed.
By Jonny Walfisz  •  Updated: 13/06/2022

A little more than a week into this year’s Isle of Man Tourist Trophy competition, five people had already been killed.

The annual motorcycle racing event, held each summer, sees riders flying along closed public roads in an attempt to set the fastest times.

It’s known as one of the deadliest sporting events and since 1937, there has only been one year in which no fatalities occurred. This year, the Isle of Man TT claimed the lives of Mark Purslow, César Chanal, Davy Morgan and father and son duo, Roger and Bradley Stockton.

It’s not the only sport with an extreme fatality rate. A health care study found that the deadliest sport is base jumping with 1 in 2,317 jumps resulting in a death. Other dangerous sports listed included skydiving and skiing.

But if these sports are so dangerous, why do we let them take place? And what kind of person does it take to want to take part?

Should we let people do these sports?

Motorsports journalist, Hazel Southwell has covered multiple disciplines of car racing, including Formula 2 which saw the tragic death of Anthoine Hubert in 2019.

As much as these sports are never going to be without any risk whatsoever, Southwell doesn’t believe the sports should be defined by mortal risk.

“There’s an acceptance that for it to be sporting and competitive, there has to be a reasonable assumption that it is possible to do it uninjured, with injury an outlier event,” she says.

“In sporting terms, the risks should be that you lose the race or that your machinery gets mangled. It should cost money, not your life,” Southwell says.

While individuals may consent to taking risks doing extreme sports like base jumping, Southwell believes it’s a different story for organised competitions. “If you have a governing body, then ultimately they have a responsibility for organising an event and they need to decide what level of risk they demand from the participants.”

“If it’s an event which you can enter, survivability should be an assumption,” Southwell says.

After the death of Hubert in Formula 2, the governing body of the sport, the FIA, conducted an extensive investigation into the causes and issued new safety recommendations.

But the Isle of Man TT doesn’t conduct a similar process after fatal incidents, claims Southwell. As well as the five killed, one person was left in critical condition this June.

The Isle of Man TT disputes this, stating that it "takes any incident or near-miss that occurs during the event very seriously".

The organisers point to a "Safety Management System" introduced this year which has reduced starters in races and increased personal protective equipment requirements for riders.

"It goes without saying that the Isle of Man TT Races will always be deeply saddened by the loss of any competitor and will continuously work to remove all possible avoidable risk," a spokesperson explains.

"However, as with all motorsports, there will always be inherent risks that cannot be avoided."

Outside of the experience of the participants, there’s also a question of what the audience gets out of watching a potentially fatal sport.

“I think it’s very unfortunate that over the course of most sports history, particularly from the old guard, there’s been a lionisation of injury and even death,” Southwell says. “But I think it’s very naïve to assume that if you witnessed it, you would not be affected by it.”

What kind of person takes these risks?

Even if sports organisations take steps to limit the risks of potentially fatal sports, there’s another dimension to how extreme sports have come about.

There are always participants willing to put their lives on the line for the sports.

So, who are the daredevils that can look mortality in the face and choose to speed up, instead of slow down?

Tim Woodman, a professor of performance psychology at Bangor University has extensively researched the way people who participate in high risk sport behave.

Woodman has found a correlation between people willing to take part in dangerous sports and a condition called alexithymia.

Alexithymia is a broad term to describe how some people can have difficulties with feeling or understanding their emotions.

What causes people to have alexithymia?

Woodman’s research has pointed to troubles in forming interpersonal relationships which can be the result of parents who don’t understand emotional expression that well.

Much of what causes alexithymia is the attachment people feel to their parents or primary caregivers.

If someone doesn’t have a secure attachment, they may develop insecurities or anxieties about attaching to other people later in life.

“If I don’t differentiate between emotions and I don’t understand what anger is or what upset is, then I will revert to not understanding what’s going on in my body,” he says.

Without the capability of understanding the feeling of emotions going through your body, most people will start to express an unresolved emotion that regularly boils down to fear, he says.

“Paradoxically, people with alexithymia are actually quite anxious. But it’s a nebulous anxiety which they can’t put their finger on.” Woodman suggests that to deal with this underlying anxiety, people will put themselves in increasingly dangerous situations because the fear starts to make sense to them.

“I understand why I’m scared because if something goes awry here, I’m going to die,” Woodman says, explaining the thought process.

“People talk about it being a sort of purifying experience because it crystallises their understanding of emotion. They were scared, and they dealt with it which made them feel good about themselves.”

The difficulty with forming attachments to people that the high-risk sportsperson can then be replaced by an attachment to the dangerous sport.

“We’ve done studies where people say ‘this activity has always been there for me’ while their relationships will come and go,” Woodman says.

Should we feel sorry, then, for these risk-takers? Woodman doesn’t think so.

“The human condition is multifaceted and we all have our different difficulties,” he says. “These people find a very effective way of managing their own personal makeup to an activity that leads to a satisfying and happy existence. I think that’s a great positive story.”