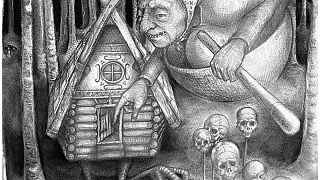 For Euronews Culture's countdown to Halloween, we’re taking a look at some of the lesser-known mythical creatures of Europe.

Today is the turn of Slavic myth, the Baba Yaga.

In Eastern European folklore, Baba Yaga (or Baba Yaga Bony Legs / 'Baba Jaga' in Polish) is a voracious and deformed crone who kidnaps her victims before cooking and eating them.

Usually children. Something about the flesh being more tender.

The supernatural entity usually lives in a house that spins continually on birds’ legs.

Oh, and if that wasn’t sinister or batshit crazy enough, she sometimes joins Death on his travels, helping him to devour newly released souls.

Put simply, she’s the terrifying inspiration for all the forest crones, wicked witches or evil godmothers you’ll have come across in childrens’ stories and films – and if you’re not even a wee bit terrified, then you’re braver than us here at Euronews Culture.

Action fans will remember that in the John Wick film series, the hitman played by Keanu Reeves is known within the Russian mob as “Baba Yaga”, which they translate (rather poorly) as “the Bogeyman”.

The Bogeyman is actually the Babayka, a monster in Russian folklore. Baba Yaga actually refers to a mean granny.

As for the “Yaga” part, it’s a composite of words meaning “snake” or “wicked”.

So the next time you’re watching the John Wick films, you can peacock by telling your friends that the screenwriters are actually fine with their hero being referred to as a mean old woman.

The Baba Yaga is usually described as having a Pinocchio-sized nose which sometimes stretches to the ceiling when she sleeps, unbreakable teeth and, despite her diet, bony legs.

She is known to glide through the air in a giant flying mortar or an iron kettle. And if you’re still not sure you’ve identified her correctly, her aforementioned house is pretty unique.

It’s a woodland hut perched atop a pair of giant, moving, dancing chicken legs. This means that the cannibal’s house can chase people and cannot be entered unless someone speaks the magical phrase: "Turn your back to the forest, your front to me."

Her fence is also charmingly topped with human skulls, a tribute to her victims as well as a pretty obvious warning that she’s not to be messed with.

There are many horrific tales of the Baba Yaga, but the most commonly known story is that of Vasilia the Beautiful, the Eastern European version of Cinderella.

After her mother’ death, Vasilia’s father remarries a woman with two daughters. Her stepmother and stepsisters abuse Vasilia and when her father leaves on a long trip, Vasilia’s stepmother seizes the opportunity to get rid of her. She is tasked with seeking out Baba Yaga to bring home more light, as they survive on candlelight.

Vasilia finds the old woman, who then gives Vasilia a series of almost impossible chores which she must complete or else Baba Yaga will eat her.

After she manages to complete the tasks, Baba Yaga is true to her word and releases Vasilia, who returns home with a skull that shines light from its eyes. This sinister glow incinerates her horrible new family.

Baba Yaga is here both an obstacle as well as a saviour, a twisted version of the fairy godmother who is an antagonist with no clear purpose. She is also an enigmatic figure who some characters seek out for her wisdom. In order to get her advice, you have to approach her carefully and with respect. It is also advised to not ask her too many questions.

Finally, many representations cast her as a mother-nature figure, becoming more of a cautionary tale: if you don’t have a healthy reverence for nature and the spirit world, Baba Yaga’s coming for you.

One place where Baba Yaga has made her mark is in the Hellboy universe of comics and films, where Hellboy investigates child kidnappings and attempts to kill her. The Baba Yaga swears revenge and becomes one of the series’ main antagonists.

She had a role in the terrible 2019 Hellboy reboot movie, which saw Big Red going to the chicken leg house and shooting the Baba Yaga's eye out.

An unofficial representation of Baba Yaga can be seen in the last Blair Witch film, 2016’s adventurously titled Blair Witch. The titular witch was nowhere to be seen in the original 1999 film, but there are glimpses of her in the last act of the reboot / sequel, portrayed as an oversized ghoul with skinny legs and a pretty insatiable appetite when it comes to camper genocide.

Finally, Baba Yaga has become something of a feminist icon over the years.

The image of a powerful old woman who does whatever she damn well pleases has become aspirational to many – she even had an advice column, “Ask Baba Yaga” in The Hairpin, a website which was founded in 2010 and ceased publication in 2018.

Who wouldn’t take the advice from someone who knows how to make the perfect toddler soufflé?

Nightmares: Do they cause dementia, and how can you stop them?

Hisssssterical: An escaped king cobra returns to its Swedish home