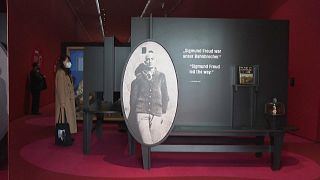 Salvador Dali was obsessed with Sigmund Freud's "Interpretation of Dreams" when he was a very young artist.

Now a new exhibition in Vienna at the Belvedere Museum is displaying around a hundred of Dali's objects, paintings, and works that were influenced by Freud's writings.

Stella Rollig, Director of Vienna's Belvedere Museum explained, "Here we cover a good decade of Salvador Dali's life and art, allowing us to show the public aspects of Dali's work that are not yet known and not often shown."

Through Freud's writings, Dali found the key to hidden fears and desires that had accompanied him since childhood.

Dali had lost his brother and mother during adolescence, while his father was an authoritarian who married his deceased wife's sister.

The two men met in London in July 1938. The fateful meeting is another theme explored in the exhibition.