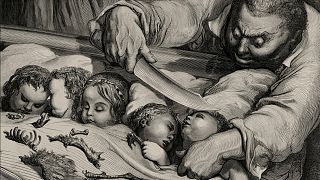 For our final entry in the Euronews Culture countdown to Halloween, in which we’ve taking a look at some of the lesser known mythical creatures of Europe, we end with France and its legendaryogres.

The word ogre is originally of French descent and derives from the Etruscan god of the underworld and punisher of oathbreakers, Orcus.

Orcus is usually depicted as a large, ugly, bearded giant, who feeds on the flesh of humans.

The word ogre was first used was by French poet Chrétien de Troyes, in his 12th-century romance Perceval, the Story of the Grail, which contains the line:

"And it is written that he will come again,

to all the realms of Logres,

which was formerly land of ogres,

and destroy them with that lance."

After its birth, the word began to be used widely by French authors like Charles Perrault and Madame d'Aulnoy, who was the first to refer to the creature’s offspring with the word 'ogree', in her story L’Orangier et l’Abeille (The Bee and the Orange Tree).

Why should you fear the ogre?

It's fair to say an ogre (according to mythology and fairytales) would not make for a very good babysitter.

They are usually described as inhumanly large, man-like beings with a voracious taste for humans, especially infants and children.

According to the book 'Companion to Literary Myths, Heroes, and Archetypes', their preference for eating children is due to a terrifying belief held by many ogres - that eating the young will grant them eternal youth.

Ogres are also noted to being hideously hairy and having unusually coloured skin, including green and blue tones.

It is easy to get ogres confused with giants, who in folklore are often given 'ogre-ish' traits, such as the giants in Jack and the Beanstalk and the beast from the Beauty and the Beast.

Perhaps the most famous examples of ogres in early folklore are in the Italian 17th century fairytale Puss and Boots and Charles Perrault's Hop-o'-My-Thumb, which tells the story of a young boy who uses his wit to save himself and his brothers from multiple threats – including being eaten by an ogre and his family.

Without a doubt, the most iconic and well known depiction of the ogre in popular culture can be found in Shrek, the hugely successful Dreamworks franchise.

The first film in the beloved series (released in 2001) centres around a green ogre named Shrek, who finds his swamp overrun by fairy tale characters banished from their kingdom by the evil Lord Farquaad.

Shrek plays with the audience's preconceived social and narrative expectation of the ogre and flips it on its heads.

In this story, while Shrek still engages in ogre-like behaviours like bathing in mud and eating insects, he is the lovable hero who saves the princess, and Prince Charming is the despicable villain.

The series proves that ogres really do "have layers".

Elsewhere in modern media, ogres can be seen everywhere in fantasy gaming worlds such as God of War, World of Warcraft, Warhammer and in the tabletop role-playing game Dungeons and Dragons.

Unlike Shrek, the majority of ogres found here serve as vicious, cannibalistic enemies for players to defeat in combat.

Watch: Salem in Massachusetts gears up for Halloween

Nightmares: Do they cause dementia, and how can you stop them?

The mythical creatures of Europe: The Green Man