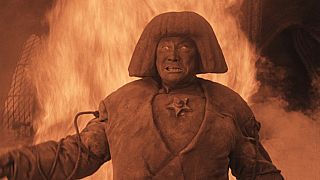 For Euronews Culture's countdown to Halloween, we’ve been giving readers brave enough a daily horror short film, as well as taking a look at some of the lesser-known mythical creatures of Europe.

Today is the turn of Czechia and the Golem.

Origin of the Golem: The power of words

The figure of the Golem originates from Jewish folklore. It is an animated anthropomorphic being created from inanimate matter – usually dust, clay or mud. The monster is brought to life by ritual incantations and a sequence of Hebrew letters.

The first practical instructions on creating a Golem can be found in the mystical text of Sefer Yetzrah, the Book of Creation, Kabbalah’s oldest text written by Abraham who transmitted it to his son Isaac.

Originally, the creation of a Golem was a way for medieval Jewish mystics to come closer to God. However, prophets have warned people against the belief that man could compete with God’s creative powers, making the creation of the artificial man simultaneously a way of honouring one’s beliefs in a higher power and the hubristic betrayal of the unwise who believe they can break the code of creation’s secrets.

For those who chose the second option (or if you’re just bored on Halloween without a goat to slaughter and want to give it the old college try), the scared word that brings the Golem to life is “emet”, meaning “truth”.

It is usually written on the Golem’s forehead, the back of its hand, or on a piece of paper inserted in its mouth.

Once brought to life, the soulless and speechless Golem becomes a helper, an avenging force and often a foe, as the creation almost always runs amok and turns into a threat to its creator.

The most famous Golem narrative harks back to the late 16th century, when rabbi of Prague Judah Loew ben Bezalel created the figure to be a defender and rescuer of the Jewish community in its time of need. His creation would protect his people from persecution. But one day, the Golem began destroying buildings and uprooting trees. Rabbi Loew, witnessing that the Golem’s power once unleashed cannot be controlled, had to destroy his once-hero-now-monster, vowing to never again create a dangerous servant.

To this day, the remains of the Golem are said to be located in the locked attic of the Old New Synagogue in Prague.

Why fear the Golem?

Let's not pretend – anyone would be bricking it in front of a big clay juggernaut that doesn’t stop until it has fulfilled its purpose. It’s basically the ancestor of the T-1000.

But if you stick to the folklore, its demise is actually quite simple and has to do with words once more.

As previously stated, the golem is often depicted with the word “emet” written on its forehead. The word consists of three Hebrew letters; aleph, mem, and tav. The myth goes that if you erase the first letter from the word (aleph), the remaining letters spell out the word “met”, meaning “death”. The imperfect creation returns to lifelessness, and the Golem is a harmless mass once more.

Despite the fact that ‘typo’ correction will rid you of the creature, the thing that’s most scary, fascinating and hard to write about when it comes to the Golem is that it is an elusive figure that has borderline limitless permutations when it comes to symbolism. Over time, it has been a symbol of war, resistance, community, despair, and even hope for redemption.

It’s a complex legend that encompasses themes including power, control and freewill, with the Golem symbolizing all these things, as well as each era’s fears.

Indeed, the figure changes over time to reflect the collective fears of the moment; it gives abstract threats a physical form.

The Golem in popular culture

With its themes of creation and hubris, the Golem legend has proven irresistible to writers and other creatives.

The most obvious parallel between the Golem story and literature is with Mary Shelley and her 1818 novel 'Frankenstein'.

In the late 19th and early 20th century, the Golem became a popular figure in literature and cinema, thanks in particular to Gustav Meyrink's novel 'Der Golem', which appeared in book form in 1915, and was filmed by Paul Wegener. The 1920 silent film is acknowledged as one of the classics of German Expressionism on screen, and a milestone in the horror genre.

Later on, the electric figure created in Fritz Lang's Metropolis (1926) can be considered a Golem, while writers like Isaac Asimov and Jorge Luis Borges have all used the figure as inspiration in their work.

References to the Golem abound in modern popular culture, especially in cinema.

Michael Myers in the Halloween films is the Golem that represents a threat to suburbia, a metaphor for societal paranoias in the same way that Godzilla, The Blob and The Thing were respectively allegories for nuclear annihilation, communism and the AIDS epidemic.

The Golem figure has also appeared in countless TV series – from The Hulk to The Simpsons via Buffy The Vampire Slayer – and due to its elusive nature, its roles on screen (either directly referred to as a Golem or symbolically represented under a different name) are countless.

One particularly memorable iteration can be found in The X Files. The episode Kaddish (Season 4, Episode 15) sees a young woman lose her fiancé to a group of neo-Nazis. To avenge him, she raises a monster who goes on a killing spree, ensuring that the cycle of violence continues. It’s a beautiful episode because the Golem isn’t reduced to one specific thing: it was created for revenge but also shows that love can be monstrous if tainted with sorrow.

The modern instrument of our undoing

Outside of pop culture, you don’t have to look too hard to establish a link between the rise of xenophobic leaders and populist hate figures with that of the Golem.

After all, what is Donald Trump if not an imperfect mass who runs amok once it has been conjured to life by a misguided collective that is fearful for its way of life and the figure of the Other?

In this example, the Golem once again symbolizes the uncontrollable threat created out of fear that mankind inflicts upon itself.

Many also see a link between the Golem and artificial intelligence.

In a 1984 interview with the New York Times, writer Isaac Bashevis Singer asked: "What are the computers and robots of our time if not golems?"

These words ring true today, especially considering our increasing dependence on technology and social media, as well as the ever-growing advances in AI; mankind’s cultural experiment to create artificial beings may eventually be our undoing.