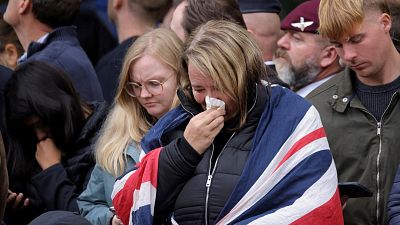 People get emotional as the procession starts on the day of the Queen Elizabeth II funeral   -   Copyright  AP Photo
By Jonny Walfisz  •  Updated: 23/09/2022

Queen Elizabeth II’s funeral was one of the most widely viewed television events ever. For many people, it was the first funeral of a British monarch they would have witnessed. The last time was in 1952.

So what made so many people feel it was important to tune in, turn up, or be a part of the proceedings in some way?

In the build up to the event  aviewing estimate of 4.1 billion people was bandied around by many sections of the British press. While actual viewership is highly likely to be much less, the UK numbers were impressive.

The ceremony was watched by a peak of 29 million people in the UK.  And not all in the comfort of their own homes, with the funeral put on in pubs, clubs, cinemas or big screens across the land. That’s slightly less than the 32 million who switched on for Princess Diana’s funeral, but still a fair proportion of the 67 million population.

Lots of Brits also felt the best way to witness the funeral was in person. The streets of London were awash with people waving Union flags and watching the funeral procession go past.

An estimate of around one million people took to the streets to see the funeral procession wind its along the route from Westminster Abbey to Windsor Castle.

A further 250,000 people are believed to have waited in the infamous queue to see the Queen lying-in-state in the build up to Monday’s funeral.

A view from the street

Jamie from London was one of the many who made their way down to the city centre for the funeral.

“The most shallow reason for attending was because it was a part of history and I didn't want to miss being even a tiny part of it,” Jamie says.

“But the deeper reason is that the Queen has always been part of my history and how I see the country. Whatever the political situation or however awful the state of the world has been, the Queen hasn’t changed.

She symbolised all that is good about this country

“She’s been a constant symbol of steadiness, calm, fortitude and courage - things that I value highly as personal qualities and also as desirable national qualities. She symbolised all that is good about this country,” he continues.

Jamie stood among thousands of people on one section of road and noticed the various different people all from differing backgrounds around him.

At the start of the procession to Westminster Abbey, the sound of the bagpipes put the entire event into perspective for him.

“I just got a lump in my throat immediately. Visceral emotion and sadness,” he says.

“When the moment came, all these different people stood together side by side, united. The people of this country as one,” Jamie notes.

The Queue as pilgrimage

Professor Simone Schnall is a reader in experimental social psychology at the University of Cambridge.

Although she didn’t attend the funeral in person, fascinated by a group's social interest to wait in line for up to 30 hours, she took the train down to London to join The Queue.

The first thing that struck Schnall about the emotion in the queue was how positive it was. The dour mood befitting a funeral procession was missing and replaced by a sense of achievement at the mammoth task they were undertaking.

“There was a sense of support and a kind of positive energy among people. At the same time there was also that sense of accomplishment. ‘We made it, we did it!’ It seemed almost impossible to think one could stand in the queue for so long, but we did it,” Schnall says.

“I don’t know if it sounds terrible, but there was so much positivity. That once you entered Westminster Hall, you couldn't immediately be sad,” she adds.

Schnall likens the effort required to join the queue as somewhat akin to a religious pilgrimage. And like pilgrimages, they are rarely done alone.

In her research, Schnall has found that people find difficult tasks more surmountable if with friends.

When a person wearing a heavy backpack is standing before a difficult mountain, they are more likely to believe they can climb that mountain if they are with a friend.

This sense of communal spirit, and the ability for a group to bolster support in ourselves is perhaps why images of the Queen’s funeral procession were so affecting.

In many ways, people found each other’s presence uplifting in the queue and attending the funeral, but also found the Queen herself as an institution uplifting in its stability.

“I think that's exactly the kind of question one would have to look at or that politicians have to look at as we go forward,” Schnall remarks, noting that with a cost of living crisis facing the UK, a sense of social cohesion and togetherness would be useful for upcoming difficulties.

Why did we care at all?

But beyond the mass social need to join the queue or watch the funeral, why do Brits feel so passionately about the Queen and the Royal Family?

Schnall points to the work of her colleague Jonathan Haidt, who has worked on theories of how people decide what’s important to them.

While some of Haidt’s theorised methods are quite rational - the need for fairness and avoidance of harm - others aren’t so.

One of these other means of making moral judgements is in-group loyalty. Another is authority and the understanding of a hierarchy and a third dimension of decision making is sanctity. That describes the sense that some things just are, and anything otherwise is unnatural.

“These other three foundations - loyalty, authority and sanctity - don't necessarily have a very rational basis unlike avoiding harm and ensuring fairness,” Schnall says. “So it’s much harder to argue with.”

“For example, arguing that a person, who by accident of birth, ended up in a tremendous position of power and wealth is completely unfair, many people feel very strongly that it’s important to have someone there,” she explains.

“People use all kinds of moral foundations or intuitions to determine what's right and wrong, what's important to them, what gives them meaning in life or what one should aspire to in life,” Schnall says.