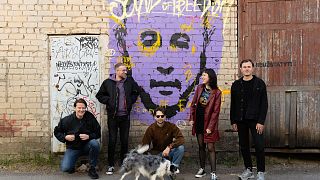 A plucky group of Lithuanian electronic music producers have released a new album to challenge autocracy around the world.

The Antidote Community, who are based in Vilnius, have produced ‘Sound of Freedom’ as a statement against all the dictators of the world, with tracks specifically targeting autocratic leaders in Russia, Eritrea, China, Syria, North Korea, Belarus and Myanmar.

The album is brought to listeners from DJs Deri Dako, OBCDN, Maria Paskevic, Caroil, Neri J, and Calli. It samples the words of the unelected rulers set to techno beats, building on a strong tradition of techno music protest.

“We had intentions to create a techno album for underground layers of society in countries ruled by dictators. Tracks in the album are quite straightforwardly against certain dictators,” says Edmondas Pučkorius, manager of Antidote.

Vilnius is home to a burgeoning electronic music scene and the Antidote Community hopes to pay homage to this, as well as the clean-up raves which have taken place in Ukraine since the Russian invasion.

“For the first time since 2004, there are more autocratic states than democracies around the world. People ruled by a dictator are gripped within an information trap: propaganda, censorship, and fake narratives,” Pučkorius adds.

“In the Sound of Freedom, seven music producers directly resist such dictators by appropriating their words to send a message of hope and freedom — a move that would surely get the record banned in autocracies.”

When was Lithuania a dictatorship?

Lithuanians are no strangers to autocracy after being annexed by the Soviet Union in 1940 and remaining behind the Iron Curtain until the 1990s.

After the breakup of the Eastern Bloc, Lithuania and the other Baltic states joined NATO in an effort to stave off Russian domination. The countries are now fervent in their support for the Ukrainian cause and a rave was held in Vilnius to celebrate Ukraine’s Independence Day this year.

Lithuania’s separation from the Soviets was known as ‘the Singing Revolution’ due to the critical role music played in the events. It is the hope of Antidote that their music will inspire others in the fight against totalitarianism.

“It's always interesting to participate in projects which go beyond regular boundaries. Especially if it contributes to some greater cause - in this case supporting democratic values and individual freedom,” says Povilas Daknys aka Deri Dako.

“What special power does electronic music and raves have?

“Good rave at its best can be a transcendental experience - it can change the way you look at the world.”

The album also features unique cover art (see below); an AI rendering of a human face called ‘The Ultimate Dictator’. The artwork is a composite portrait which combines the faces of 40 dictators.

The work, created by Pijus Čeikauskas, is on display in Vilnius Open Gallery, an open-air space in the city’s New Town.

“We wanted to identify the face of evil. To do that, we ranked countries using data from a few independent freedom and democracy indexes,” says Pučkorius.

“Forty countries with the worst results were picked. Then, using an AI visual tool, we morphed these dictators’ faces into one to get the ultimate dictator, which was used as a basis to create the artwork.”

'Sound of Freedom' is available on Soundcloud and Bandcamp.