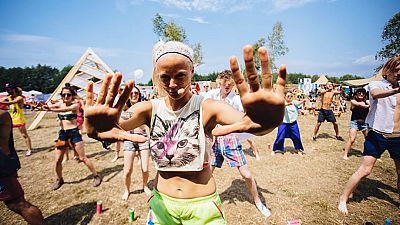 Leni Wolf is walking home after a hard night's raving in Cologne. Her body is knackered and her mind slightly frazzled, but she has had a lot of fun.

And that is when Wolf had an idea.

Why should I only do this on the weekend at a club, she thought to herself. Why not put on a training suit and dance properly, without sampling the 'unhealthier' aspects of rave culture.

This is how 'rave aerobics' was born.

It is a high-intensity, high-power fitness class, where music-mad Wolf dances with people to 200 BPM music, although they also dabble in more "chilled" genres such as Dark Techno, Disco and House.

"Rave aerobics is the combination of silly billy 80s stuff, where people dress up, and the power of electronic music," says 37-year-old Wolf.

"Aerobics is funny, light and trashy but rave is the darker more intense part," she said.

Wolf founded her Rave Aerobic dance enterprise 12 years ago when she was in her 20s.

After a warm-up which takes "you back to the 80s", one of Wolf's classes guides her dance disciples through a choreography, which gets "faster and faster" and more "complicated", until everyone starts "expressing" and "freaking out."

The classes do wonders for the waistline, with one hour of dancing burning on average 500 to 600 calories, Wolf claims.

"We simply grove to music that we enjoy," says Wolf. "Sometimes it is amazing. I never know how a class will end up -- just like a rave."

'Turn up the confidence'

More than getting hearts pumping and brows sweating, rave aerobics is about freeing people and making them feel good.

"I want to empower," said Wolf. "Our classes make people happy, fun and easy-going". All of which, she says, does wonders for the soul.

To spice things up, Wolf and her boogie partners often don fancy dress and really let loose under the disco ball.

Her fun-loving classes attract people of all ages, with Wolf dancing alongside retired 70-year-olds and teenagers, and she is quick to stress they are "not just for dancers, but all those in-between."

"We want to make people more confident, particularly those who say they are usually afraid of dancing in front of others," she said. "People who believe they cannot dance and judge themselves."

One of Wolf's favourite pupils is an overweight, elderly man who has repeatedly told her how much he loves rave aerobics - the only class he goes to.

"Even if he is always the one with a left foot up in the air when it should be a right, the feedback is the sweetest thing."

Wolf herself was inspired to start rave aerobics after growing disenchanted with traditional dance classes.

"There was too much pressure," she said. "We would listen to the same over and over again, craving for perfection. I just wanted to enjoy the music, I didn't really care about doing it right.

From its humble beginnings as a one-woman band, Wolf has single-handedly built up Rave Aerobic and branched out into different dance styles, such as twerking, afro-aerobics and soul aerobics.

She was forced to take on new dance instructors at one stage, after breaking her foot from "dancing too much." Now Wolf says she has a "wonderful, diverse and authentic team of artists and dancers," which grows each month.

Wolf's classes are typically held at a studio in Cologne, Germany. However, she will do rave aerobics anywhere she is invited "rooftops, river banks - you name it."

It has proved a hit at festivals across Europe, pulling in hundreds of revellers and wannabe Madonnas. At one festival, Wolf danced with such a large crowd she "could not see the end of people dancing."

"It didn't make me nervous," she recalled. "To me, it is an art to put people into synchrony to music, with everybody in the same turns and jumping."

When she had her epiphany back in 2009, Wolf could only find one other group that was doing something remotely similar - Retro Sweat in Australia - but now a whole host of organisations have jumped on the ravey bandwagon.

"Right now I am totally happy," she says, "rave aerobics is my baby, the thing I love and work on the most."

After working her regular day job, Wolf says she is happy that each evening she can go and dance.

"I have never had one lesson where I thought that was just ok, sometimes it is even hard to go to sleep afterwards," she said.

Looking to the future, Wolf's "next big thing" is to extend the joy of dance to people with physical disabilities.

"Dance is still very exclusive in society ... we want to develop something where everyone can be involved."

"It is something we as a society need to focus on," she added.