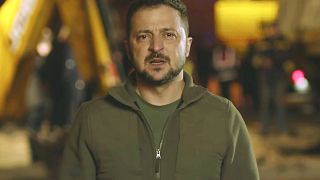 Ukrainian President Volodomyr Zelenskyy is to publish a collection of his wartime speeches in December.

Zelenskyy’s ‘A Message from Ukraine’ will be published on December 6 by Crown, a division of Penguin Random House.

The book will collate 16 of Zelenskyy’s most moving speeches to Ukraine and the world in support of his country against Russia’s invasion. It also features a preface by Arkady Ostrovsky, the Economist's editor for Russia and Eastern Europe.

Zelenskyy made a statement that the book is much more than just a stocking filler for dads with an interest in military history. Nor is it his attempt at making a Sun Tzu style ‘Art of War’.

“Supporting Ukraine is not a trend, a meme or a viral challenge," Zelenskyy said in a statement.

“It is not a force to rapidly spread across the planet and then just as rapidly disappear. If you want to understand who we are, where we are from, what we want and where we are going, you need to learn more about who we are. This book will help you do just that.”

Proceeds from the book will go to United24, an initiative Zelenskyy launched to coordinate charitable donations to Ukraine.

This isn’t the only literary engagement this week for the Ukrainian President. Zelenskyy appeared at the Frankfurt Book Fair today.

"Instead of importing culture, Russia imports death," the president said over a video link.

"So I ask you, please do everything to make people know about the terror that Russia brought to Ukraine."

"Knowledge is the answer," Zelenskyy said. “Books, documentary scripts, articles, reports - these are the answers."

This year’s book fair has support for Ukraine as a theme, hosting multiple Ukrainian authors including the punk poet Sergiy Zhadan.

Zhadan put his literary career aside when the war started to help with humanitarian aid and army support. At the fair, he will read his poems and be interviewed.

The book fair has also banned Russian state institutions from taking part, but will host allies of Putin critics Leonid Volkov and Irina Scherbakova to speak on opposition within the country.

Russian science fiction writer Dmitry Glukhovsky will also appear. Glukhovsky was labelled a “foreign agent” by Moscow two weeks ago after criticising the invasion. The designation by the Russian state codifies abuse of journalists and artists.