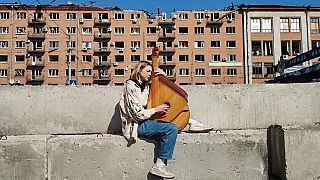 Ukraine's Independence Day celebrations this year have taken the most unusual of turns compared previous commemorations.

As the Russian invasion of Ukraine stretches to six months, the country’s future has been plunged into the most uncertainty since its independence from the USSR in 1991.

In an emotional speech to mark the day, President Volodymyr Zelenskyy told Ukrainians the country was “reborn” when Russia invaded on 24 February.

"We will fight for (our land) until the end," he said. "We have been holding on for six months. It is hard but we have clenched our fists and we are fighting for our destiny.”

Other world leaders lent their support on the day with the UK’s Prime Minister Boris Johnson visiting Kyiv personally on Wednesday.

Back in Britain, the day has been an opportunity to consider the cultural ties between the two countries that have developed since the start of the war.

In Scotland, the sixth Edinburgh International Culture Summit is gearing up to welcome artists, culture ministers, parliamentarians and global influencers from around the world.

Alongside the Ukrainian Institute, the summit will have a special focus on Ukraine’s culture sector.

“While the whole of Ukrainian society is affected by the Russian aggression, culture makers are among the most vulnerable groups,” Volodymyr Sheiko, Director General, Ukrainian Institute said.

“Russia’s invasion and other wars and conflicts around the world are an attack on our essential freedoms and the integrity of pan-European and global cultural relations. We must not face these challenges alone,” he added.

As part of the summit, the Ukrainian Institute and the British Council will run a special Culture Leadership Dialogue. This dialogue will kick off a year-long programme to support cultural activity in Ukraine called ‘UK/Ukraine Season of Culture’.

The summit will run from 26 August to 28 August.

The programme is intended to maintain Ukraine’s culture sector through the war and preserve it for the future.

Prominent novelist, essayist and poet from Ukraine, Oksana Zabuzhko, Heba Alwadi, an alumnus of the Trojan Women Project, a ground-breaking advocacy group for refugees to tell their own stories through drama, and Professor Irina Bokova, Director-General, UNESCO 2009-2017, will all speak at the event.

Maryna Krut, more famous as KRUTЬ, the renowned Ukrainian singer and songwriter will play the bandura, the traditional Ukrainian string instrument, in the Parliament’s Debating Chamber.

“Freedom of expression is a principal value guaranteed by the Ukrainian Constitution,” said Oleksandr Tkachenko, Minister of Culture and Information Policy in Ukraine.

“The Russian Federation’s aggression against Ukraine denies our right to be free, to have our own history and culture. Ukrainian artists, creatives and journalists are struggling not only for their country, but for the democratic values of a free world, for cultural diversity and our common future. That’s why we need to unite efforts in supporting Ukrainian culture and media now inside Ukraine.”

Ukrainian families in the UK

From the beginning of the Russian invasion, many families have fled their homes in Ukraine for other European countries.

Ukraine’s Independence Day is a startling chance to reflect on the war from the UK for these refugees.

“We celebrate Ukraine's Independence Day every year, but this year especially, because right now, at the cost of thousands of Ukrainian lives, we are fighting for our independence,” says Anastasia, a Ukrainian refugee in Manchester.

“Yes, we are celebrating. From the morning we congratulated all our relatives and friends on this holiday and remembered those who unfortunately died in the war for our Independence! Told our colleagues at work about this holiday and that it is our most important holiday!”

“The Ukrainian community in Manchester has prepared some events on this occasion and tonight we are going to the Ukrainian center "Dnipro" for a charity concert in support of Ukraine. We believe in our victory and we know it will come soon! We will free all our cities and next year we will celebrate this holiday in all cities of Ukraine!,” Anastasia adds.

Viktoriia, another refugee, has been watching the ceremonies on TV including Zelenskyy’s speech.

“We all believe in our country and its independence,” she says. “We also congratulate all our friends and believe that next year we will be able to meet together and be proud of Ukraine.”

When reflecting on the role the UK has had in the war efforts, Valeriya, Viktoriia’s daughter, was thankful.

“We are very grateful to Great Britain, and especially to you, who gave a helping hand to our country and Ukrainians, who really helped to feel at home, with all the opportunities, rights and opportunities,” Valeriya says.

“We have adapted to Great Britain. Our sponsors help us a lot, they are very good people with a big and kind soul! Thanks to Great Britain and all its people for their help and support, we need it very much and help us a lot!” said Snizhana, a friend of Anastasia, also living in the UK.

Meet the artists producing bulletproof vests for the Ukrainian army