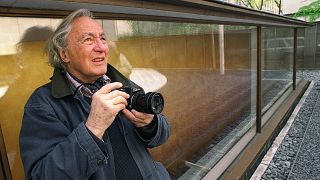 In a statement, his son Pierre Klein, said his father passed away on Saturday night.

Klein’s career spanned many decades and mediums, and his life encapsulated the post-war boom in creativity.

Getting his big break in American Vogue in 1954, Klein changed fashion photography forever by bringing models out of the studio and into the streets of the city, mingling them with passers by.

Perhaps Klein was best known however for his documentation of the streets of New York, with his work ‘diary’ - a book titled "Life is Good & Good For You in New York."

“I was no more convinced by sentimental, humanist, nostalgic and clean photography, which dominated at the beginning of the 1990s. 1950. I wanted to shake things up. I had to keep myself as far away as possible from art photography.”

From New York in later years Klein took his innovative style to the streets of Rome, Moscow, Tokyo and finally Paris in 2002.

Who was William Klein?

Klein was born in New York to Jewish Hungarian immigrant parents and from a young age dreamed of going to Paris.

He finally made it to Europe in the 1940s but under less than idyllic circumstances as part of the US army occupying Germany in World War II.

After winning a Rolleiflex camera in a game of poker and gaining a scholarship, Klein studied abstract painting in his dream destination of Paris, and prior to working at Vogue was commissioned to adorn the walls of Milan’s Piccolo Teatro.

Aside from his widely admired photography work, Klein also directed several films and documentaries  including ‘Who are you Polly Magoo’ a satirical takedown of the fashion industry and portraits of pop rock legend Little Richard and boxer Muhammad Ali.

His work was exhibited at some of the most prestigious art galleries in the world including MoMA in New York and the Musée de l'Elysée in Lausanne.