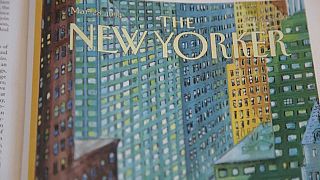 New York and Jean-Jacques Sempé are a great love story that continues even after his death.

At aged 40, the Frenchman, already famous at home, became an artistic icon across the pond, designing over 110 covers for the New Yorker.

Following his death at aged 89, the magazine is honouring one of its favourite cartoonists by republishing one of his drawings on the cover of its September issue.

The French illustrator began his work with the New Yorker in the 70s after meeting American illustrator Ed Koren, who introduced him to Manhattan, Queens and Brooklyn and eventually to the magazine's newsroom.

In 1978, Sempé or "Jean-Jacques" (as he was known amongst his friends and colleagues) saw his first sketch grace the cover of the illustrious American periodical.

Hundreds of covers demonstrated his "joie de vivre" in the Big Apple, amazed by its colours, energy and people.

For the magazine's art director Françoise Mouly he became a close friend.

"When he came to New York, he knew how to find the human aspect of the city. Of course, he knew how to draw the buildings and the symbols of the big city, but it's the human stories that remain and that we remember among his covers," Mouly said.

People at the heart of his art

Showcasing the banality of life on a giant backdrop, reminding us all we are tiny atoms in a giant university, was a speciality of his. And it was a winning technique as it contributed to his popularity at the New Yorker.

For Mouly, the representation of the individual surrounded by the big city is something that all the inhabitants of the city that never sleeps can relate to.

Sempé didn't just leave his mark on the pages of the New Yorker and in the hearts of the public.

On the corner of 9th Avenue and 47th Street in Manhattan, a giant half-faded fresco on the back of a building bears the artist's stamp.

One can make out a man carrying a woman on a bicycle, followed by a little boy on his own cycle -- one of the deceased French artist's favourite themes.