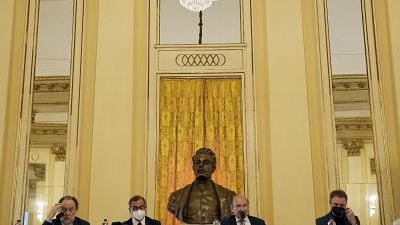 One of Milan’s most famous opera houses is to open its upcoming season with a Russian opera in an attempt to ‘separate culture and politics’.

The famed La Scala opera house will celebrate next season's gala premiere with the Russian opera ‘Boris Godunov,’ it announced on Monday.

Directors at the famous cultural institution have stressed that the calendar was set long before Russia’s invasion of Ukraine.

La Scala's 2022-23 calendar will also feature a host of Russian stars singing roles in ‘Boris Godunov’ as well as other titles, including soprano Anna Netrebko in ‘Macbeth.’

Netrebko had previously retired from performances in the wake of the war in Ukraine, only to return to the Philharmonie de Paris earlier this year.

"We hope that we will have a St. Ambrose that will also celebrate peace,'' said Mayor Giuseppe Sala, who is president of La Scala's board, referencing the day of Milan’s patron saint when La Scala holds its annual season opener.

La Scala general manager Dominique Meyer emphasised that the choices were made two to three years in advance, as is common practice in the opera.

Why is culture part of the war in Ukraine?

The move is a step change from previous removals of Russian art from performance schedules across Europe and withdrawals by major retailers from Russia itself.

The announcement of the rare Russian premiere comes months after La Scala became one of the first opera houses to exclude Russian conductor Valery Gergiev after he failed to respond to their appeal to denounce Russia's invasion of Ukraine.

Opera house management was quick to separate Gergiev from other Russian artists who will be performing in Milan, noting his position as the general director and artistic director of the Mariinsky Theatre in St. Petersburg puts him close to Russian President Vladimir Putin.

"We considered him like a politician. The others, no. He is almost culture minister. It is another case,'' Meyer said.

‘Boris Godunov,’ which the La Scala program calls "a disturbing fresco on the brutality and solitude of power," opened the 1979-80 season, conducted by Claudio Abbado.

Chief conductor and musical director Riccardo Chailly, who assisted Abbado's 1979 premiere of ‘Boris Godunov,’ said he has long been pushing for more Russian music on La Scala's calendar, which is historically heavy on the Italian repertoire.

"It would be serious to penalise the artistic aspect for the tragedy that we are all aware is happening in Ukraine,'' Chailly said.

"It is important to distinguish the two things. Give merit to those who deserve it and to bring back to life masterpieces completely independently of events."