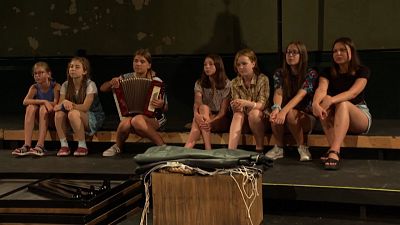 A group of Ukrainian children (aged 7-14) will perform their play, 'Mom on Skype', at New York's Irondale theatre this weekend, as part of a fundraiser for the Ukrainian military.

The first time the eight children performed the play was from a bomb shelter in Lviv, Ukraine, just two months after the Russian invasion began.

The inspiring story was discovered by Terry Greiss, the executive director of The Irondale Centre, who soon reached out to the group's art teacher turned active-duty soldier, Oleg Oneshcak.

"I'm thinking, this is amazing that with bombs perhaps falling outside the window, what do these people do? They decide to make a play. If there's anything that talks about the importance of art to the culture of a community, to the survival of individuals in that community. This is the project," said Greiss.

Oneshcak responded right away to Greiss' proposal, and Irondale quickly raised the funds to bring them over to New York.

The children made a 26-hour journey through Poland before arriving in the United States.

The play, written before the Russian invasion, tells the true stories of Ukrainian children left without parents due to war and other forces.

"It's about kids who are living without parents because their parents are traveling to another country to find a better future, a better life," said Anastasia, one of the Ukrainian child actors in the play.

"The parents think that in another country it will be better, there will be more money, it will be better future for their kids. But it's wrong because all that children need is love from parents," she added.

The performance is also a fundraiser for Ukraine's war effort, with the group aiming to raise enough money to buy a fighter jet.

While Greiss stated he does not want to be "an instrument of war", he believes it is up to Oneschak and the children to decide what they want to do with the funds raised.

"It's their effort that they're putting into this. The money will be their money. They should do with it what they want to do with it, what they feel they need to do with it. And the fact that 10, 11, 12-year-old girls were talking about a fighter jet - that's both sad and grandiose," he said.

You can see “Mom on Skype” at The Space at Irondale on Saturday 13 August and Sunday 14 August.