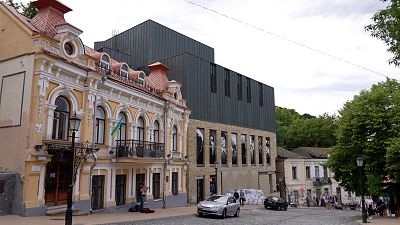 A theatre in Kyiv, Ukraine has reopened to a sold-out performance.

Theatre on Podil is one of the latest cultural institutions to reopen in the Ukrainian capital since Russian forces invaded the country.

After the National Opera and cinemas started reopening their doors at the end of May, Theatre on Podil put on its first show since the invasion.

“We were wondering how it would be, whether spectators would come during the war, whether they think at all about theatre, whether it’s of any interest,” said Yuriy Felipenko, one of the actors involved in the production.

“And we were happy that the first three plays were sold out.”

The theatre is putting on plays with a limited number of actors, Felipenko explains.

The decision to perform in the arts while the country is at war has been taken seriously by all those involved, explains actor, Kostya Tomlyak.

At first, he hesitated to perform, but the influx of people returning to Kyiv since the hostilities have lessened persuaded him that the show must go on.

“You continue living, although you don’t forget that there is the war. The main question is how actors can be helpful,” Tomlyak says.

The theatre is located in the historic neighbourhood, Podil, or ‘lower city’, which lies on the bank of the Dnieper River and is one of the most thriving cultural areas in Kyiv.

Established in 1987, Theatre on Podil has become an integral part of the Kyiv arts scene as an academic drama theatre run by artistic director Vitaliy Malakhov. It is one of the only hubs for modern theatre in Ukraine.

Although the theatre has now ostensibly returned, there is no escape from the realities of the war.

Before each performance’s description on the website, there is a warning for how the theatre will deal with air raid sirens.

“If air raid is announced, all spectators and theatre staff must follow to the shelter. After the signal to cancel the danger, we will continue to play the play.”

“In case the alarm lasts for more than an hour, we will play the play on the morning of the next working day, so that everyone can get home safely before curfew,” the website explains.