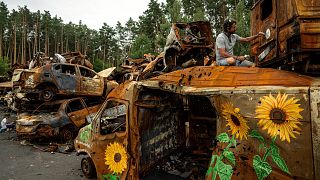 "Flowers for Hope" is an initiative taking place in the war-torn Ukrainian city of Irpin, which sees volunteers taking burnt and destroyed vehicles and turning them into poignant works of art.

As part of the project, volunteers have been painting sunflowers, the national flower of Ukraine, around the city, in an effort to raise funds to help rebuild the city.

In early March, Irpin, located a stone’s throw away from Kyiv, was seized and occupied by Russian troops for three weeks.

A symbol of commemoration

The art project was initiated by Trek Thunder Kelly, an artist from Los Angeles, who said he was affected by the atrocities he saw happening in Bucha.

It aims to provide a distraction in environments devastated by war and raise money for humanitarian aid.

"I'm a muralist in the United States, so I was thinking, how can I what I do to benefit in some way?" he told AP.

He and a number of Ukrainians have been painting sunflowers in approved sites on dumped and burnt out vehicles all over the city.

Roman Yanko and his mother Olena Yanko, a 32-year old artist, are among those who have been involved in the project.

Yanko explained that there was a special significance of the sunflowers.

"It is symbol of commemoration of those who died (in the war)," he said.

"Flowers for Hope" will be selling artworks as NFTs (non-fungible tokens) on the blockchain, to help raise money for local humanitarian projects.