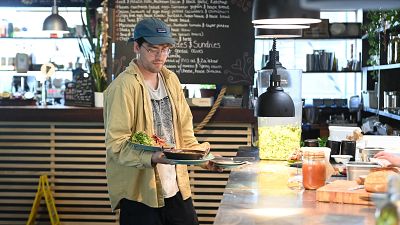 This Bristol restaurant has got CO2 on the menu but will customers pay attention?   -   Copyright  ASHLEY CROWDEN/AFP
By Tim Gallagher  •  Updated: 11/08/2022

"Three kilos for a burger, wow! I can't believe it," says Enyioma Anomelechi, as they sip a beer in the sun outside of The Canteen, Bristol.

Anomelechi is remarking on the new menu feature at The Canteen, which is currently listing the carbon emissions of the food it serves to its patrons in the south-western city of the UK.

The beetroot and carrot pakora with coriander yoghurt sauce is responsible for just 16 grams of CO2 emissions. The aubergines with a miso and harissa sauce with tabbouleh and za'atar brittle caused 675 grams of carbon dioxide.

As customers peruse the vegetarian fare on offer, a comparison is provided with a dish that The Canteen does not serve: the emissions from a UK-produced hamburger.

The menu notes that a real beef burger's emissions is "10 times the amount of its vegan alternative."

But why do this?

Plant-based culture for the planet

Businesses and citizens are coming under increasing scrutiny over their carbon emissions as the world races to reach net-zero by 2050.

It is now common knowledge that any attempts to limit global temperatures to below 1.5C must include a dramatic change in the way we farm and the way we eat.

In July, The Canteen became the first UK restaurant to agree to put its carbon footprint on the menu under a campaign spearheaded by vegan campaigning charity Viva!

To calculate the dishes' footprints, The Canteen sent its recipes and the source of the ingredients to a specialised company called MyEmissions. MyEmissions then calculated the carbon impact from "cradle to store", taking into account farming, processing, transport and packaging.

"This is a way to understand and improve ourselves,” says The Canteen’s manager, Liam Stock.

“In England if you're a big chain restaurant, it's the law that you have to have calories on (the menu). But a lot of people are saying they're more interested in carbon."

According to government statistics, the average British person has an annual carbon footprint of more than 10 tonnes, and the country has set itself the goal of reducing emissions by 78 per cent by 2035.

Will carbon counts on menus make a difference?

The Canteen may be the first UK restaurant to adopt the practice, but it is not a world original.

In 2020, US chain Panera Bread teamed up with the World Resources Institute to roll out a climate labelling system to its 2000 locations in America, allowing customers to identify low-carbon options.

Meanwhile, at last year's COP26 hosted in the Scottish city of Glasgow, restaurants served food that came with a carbon tag.

While calorie counting has long been considered a dubious method of increasing nutrition by many, the influence CO2 counts can have on consumer behaviour remains to be seen.

"If I was choosing between two dishes, maybe depending on how hungry I was, I might choose the one with a lower footprint," said Nathan Johnson, a diner at The Canteen who opted for the chef's salad, which racks up 162 grams of carbon.

"When I go out to eat I just want to enjoy," says Anomelechi, noting he would be more inclined to change his ways when grocery shopping.

"We are in a climate emergency and consumers have to be able to make informed choices," says Hellwig.

"Most people would actually choose for the planet."

This will impact your life