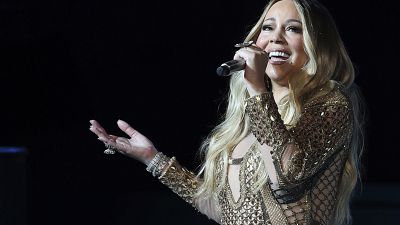 The singer is taking part in a festive promotion for the fast-food chain   -   Copyright  Kamran Jebreili/AP
By Tim Gallagher  •  Updated: 11/11/2021

All I want for Christmas is...a quarter pounder?

Mariah Carey’s ubiquitous song won’t be the only thing connecting her to the festive season this year, as the singer has teamed up with McDonald’s to promote a Christmas saver menu.

For 12 days from December 13th US customers who spend $1 on the McDonald’s app will get the day's menu item for free. Not your average advent calendar, that's for sure.

Mariah’s back for the holiday season and this time, she’s bringing a whole menu with her pic.twitter.com/loeeSfe6k2

McDonalds are rapidly in the business of celebrity partnerships as a means of attracting younger customers and gaining members for their loyalty program.

The fast-food chain has already partnered with K-Pop group BTS and rapper Travis Scott in an effort to attract Gen Z to their menu.

However, the ad-campaign for the Mariah Menu has raised a few eyebrows on Twitter where users were quick to point out the amateur graphic design feel of the promotional image.

Besides this some question why the 'Glitter'-star is standing on a sunny beach next to a submerged McDonald’s restaurant, not a typical Christmas scene.

Lately, McDonald’s have been busy trying to prove their green credentials with the release of the McPlant burger earlier this year and a pledge to reach net-zero by 2040. Some have suggested the campaign is a commentary on climate change, and Mariah’s signature whistle tone could be a siren call for action on carbon emissions.

The queen of Christmas now becoming a modern day Venus and the McDonald’s arches being the shell from which she was born out of is commentary on snow becoming coastal flooding due to global warming and its relation to consumerism. In this essay I will https://t.co/2uW99svueI

One user described the Botticelli inspired tableaux as a "powerful statement on climate change" while another questioned whether Mariah would be the last woman standing after the earth is ravaged by extreme weather.

the only two things left standing after climate change has ravaged the earth will be a mcdonald’s and Mariah Carey https://t.co/hF7SZh3DTc

Mariah and McDonald’s addressing climate change and rising sea levels we need more of this https://t.co/vRzLJKw0Og

Twitter users were encouraged by McDonald's tackling of such a serious issue head on and questioned whether the advert showed the consequences of failure to limit CO2 emissions.

Why does this look more like an advert suggesting if we don’t do something about CO2 emissions then McDonalds will be plunged underwater from rising sea levels?? https://t.co/OI3kRboBBw

With negotiations at COP26 going down to the wire this week, could it be that Mimi and Maccies are trying to warn us to stick to 1.5C?

We can only hope.